In my last post, ya’ll got to hear what I’ve been doing that has kept me away from sewing. Here is another project I’ve been working on. Last year, when I moved out of the house, I picked up a cheapy (but all wood) dress and nightstand for my twin girls. It was originally a light pink color that was pretty ratty. I sanded the crap out of this and got all the pink off of it. Then I spray painted the dresser black and the drawers a darker shade of pink. I found some wooden knobs and painted them black to match. You can’t really tell in this picture but the dresser has got great little details. It’s missing a drawer because there is a little wood gluing going on. 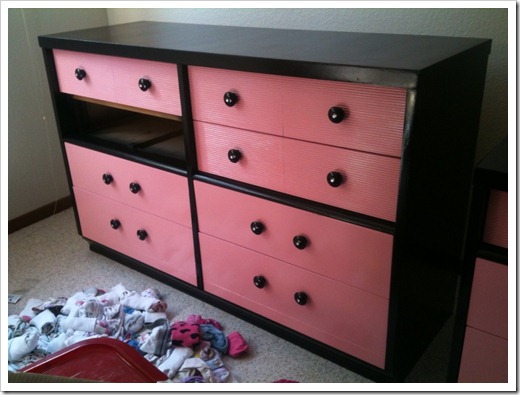 Here’s the matching nightstand. I need to get a few more knobs. 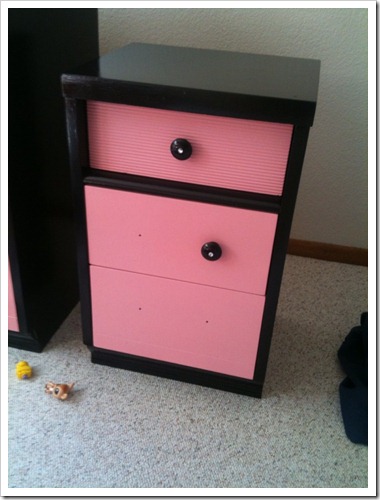 Here’s a close-up so you can see the detail. I added little adhesive gemstones to the handles. I love them. 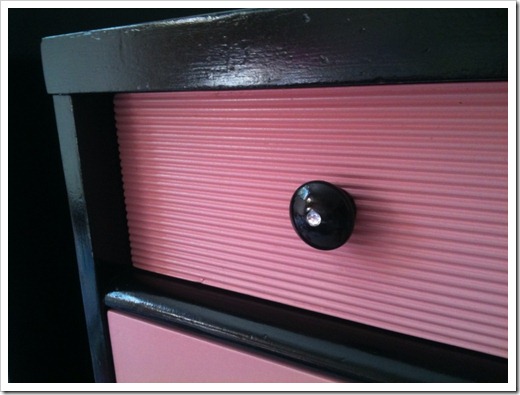 Another close-up of the big dresser. 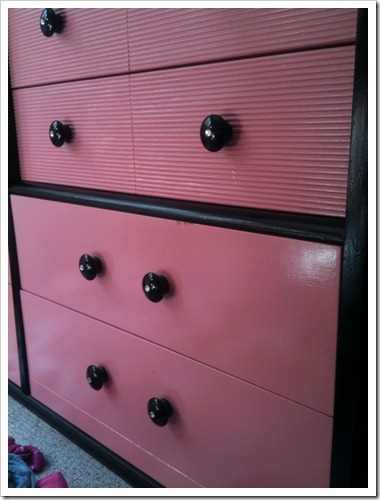 I’m hoping I’ll be completely done with the knobs and everything in the next day or two. My girls will looooooooooooooove it.

I’m so sick of writing, “I’m so glad I’m back to sewing and blogging.” I feel like I’ve been saying shit like this for a year. So, I will be forgoing that little song and dance and just pretend that I’ve been sewing and blogging all along. Tra la la la LA. There will be a little ditty at the end of this post if you’ll like to hear me complain a lot and explain some pretty crazy-ass relationship shit.

After I made my swimsuit, I wanted a little summer cover-up to go over it. I’ve had this cut out and partially sewn up for quite a while. Between this and that (I’ll go into that at the bottom) it’s been about three weeks since I started this. I never used to do this. Uck. Well, it’s done and I really like it. It’s kind of like a backwards wrap top. I love how low the back is. It’s perfect for a cover-up but probably not by itself. I made it out of some of that ITY I bought a while ago from Fabric.com.

Here you can see the back wrap portion. 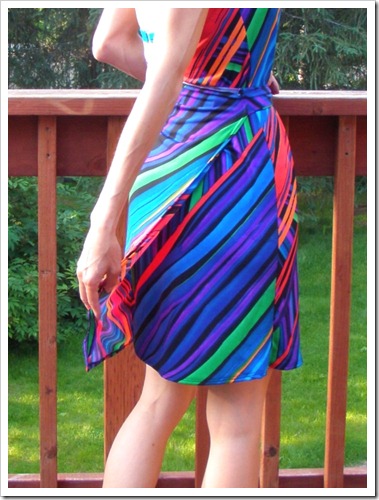 The complainy part:
Between removing trees in my backyard (about five total and one that was HUGE), putting security cameras up and running wire (there are a lot of freaking doors in this house which means a lot of cameras), removing the dark wood paneling in my house (I’m going to sheetrock it), replacing my 21 windows (they were old and very drafty), having my camera break, not having connectivity in my sewing room, losing most of the photos on my blog (it will be easy to put them back in but it takes time and connectivity – see above), training for a marathon, and dating a man, I’ve had so little time and energy I haven’t been sewing OR blogging. I’m feeling burned out but happy. I’ve managed to go out of state a couple of times, had tons of fun with my kids, and gone camping several times this summer.

Oh, and for those of you worried that I was irritated by Anonymous’s “button tits” and “shriveled prune” comment, rest assured. It made me giggle a bit and that was it.