I always have this problem when we go camping. Camping involves rain and dirt and marshmallows and campfire. My kids all own raincoats and we take them camping. Inevitably, they end up with little burn holes in their polyester raincoats and it makes me angry to ruin good clothing. So this year I made them a rain/fire/get-in-the-muck coat. I used this amazing Polartec fabric that is wind and waterproof and breathable. You guys have seen it here before when I made myself a running vest. I love that vest. I used the Jalie 2319 pattern that I’ve used so many times before (here, here, and here).

The kids loved them and they practically lived in them over at the fishing site. For those of you who don’t remember this pattern (it’s discontinued) here’s the pattern front and back: 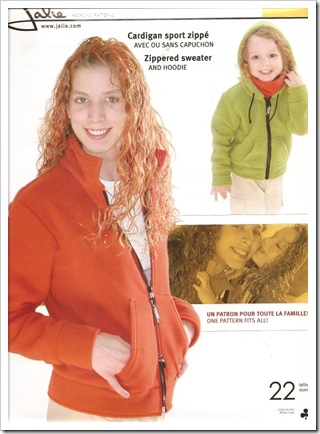 And here’s a smattering of pictures of the coats. I embroidered fun stuff on the back of the coats. I can never get Little Miss Thing to stand still long enough for a good picture. They are all the hooded version and I used three different types of ribbing for the four coats. My son has striped knit binding, the twins have a green binding, and Little Missy has pink cuffs and rib knit because what other color would she have? Um, pink is the only color, right? 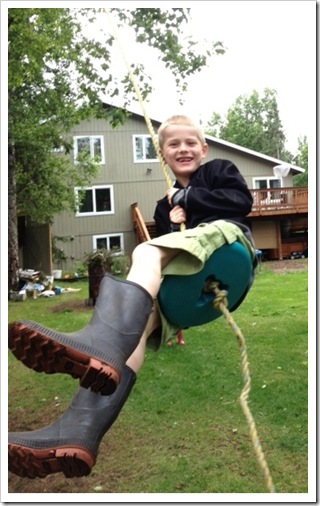 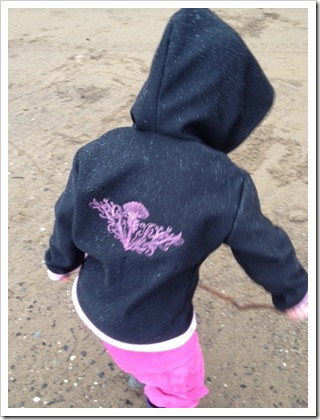 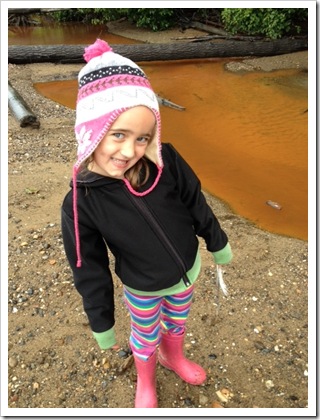 Here are all four of my coats (my son is waaaaaaaaaaaay down at the beach – that counts, right?). 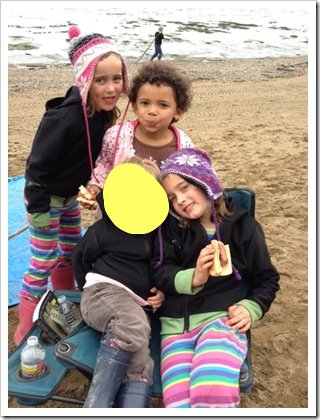 This was Miss Helpful posing for me.

In the end; happy, warm kids and coats with no little holes! The kids call them the Camping Coats. The only technical thing I would say about this coat is that the torso seems to be a bit short and the arms a bit long. I always add an inch to the torso length and I should have took an inch off the arms. Obviously I left the pockets off this version.

Where the heck has Dawn been?

Well, I’ve been kind of busy. Remember when I used to write about moose hunting and the harvesting and butchering that happened at the end of the year in the fall? Well, fishing season happens in July and The Man I’ve hooked up with is a fisherMan. We don’t typically get a moose every year now but we eat mainly salmon. Yummy, delicious, fresh-from-the-net sockeye salmon. The family commercial fishes and last week was a good week. Each sockeye weighs about 6 pounds and the tender that picks up the fish typically pays between $0.40/pound and $3.75/pound. This year I think they are paying $1.40/pound. Before we sell any fish, we put away enough fish for the family. I usually take about 60 fish for my family of six. We typically eat fish three times per week. My kids love it and I have quite a few recipes that rock. Oh, and I should mention now, if you are going to tell me I’m a bad, horrible person for killing another creature, then move on now vegan/vegetarian/meanie-head. Mind you, I have no problem with what anyone chooses to eat but I do have problems with people who randomly, anonymously write nasty things. If you have a problem with what I eat and publish to the web, don’t read it. If you do want to comment and say I’m a bad person, at least have the balls to use a name and link it back to your own blog. Don’t be a chicken-shit and write nasty comments and then put it in an anonymous post. Sheesh.  (Did you know there is such thing as a freegan? They only eat out of dumpsters. I learned this on Project Runway the other night.)
Many of you really liked the moose hunting posts and the backstory on the hunt and butchering so I figured I’d tell you a little bit about this too.

So here are the beauties. This is about 350 fish. Almost all of them are sockeye (red) salmon. This is my favorite kind. First, you catch the little suckers in a gill net that hangs between two buoys and two anchors. This suspends the net in the water and the fish try to swim through the net. Their heads fit through but the bodies do not. They get stuck by their gills. We pull them out of the water, take them out of the net, and bleed them (sorry to your squeamish sorts). 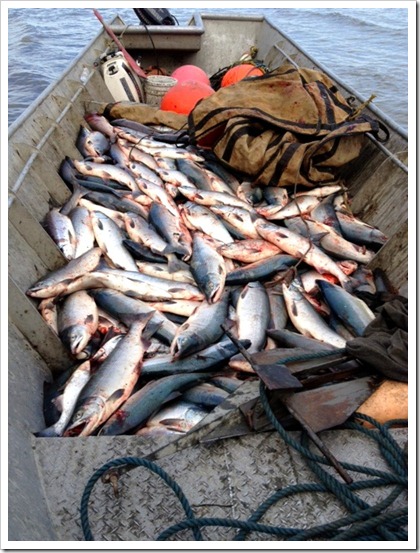 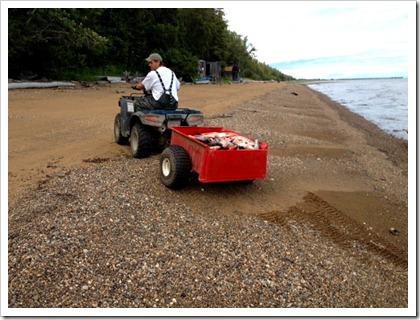 Then they are put in bags in the creek. This creek looks nasty and polluted but that’s because of the high concentration of iron in the rocks here. The water is crystal clear and perfect to drink (well, except for our little friend Giardia - we don’t drink the water.) 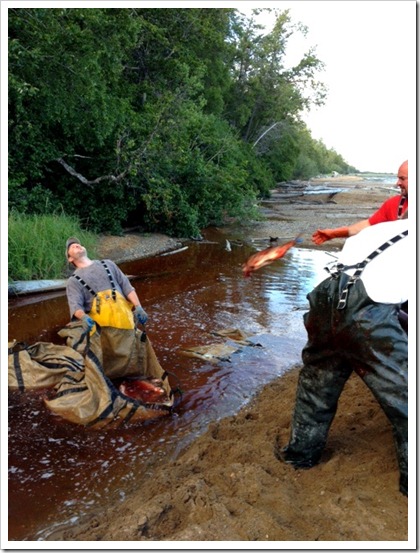 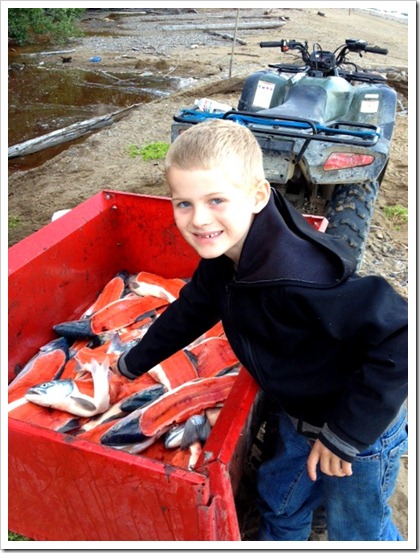 One of my jobs was to man the vacuum packer and start processing the fish. There is no power here so this is all done with the help of a generator. Here is some of the haul. 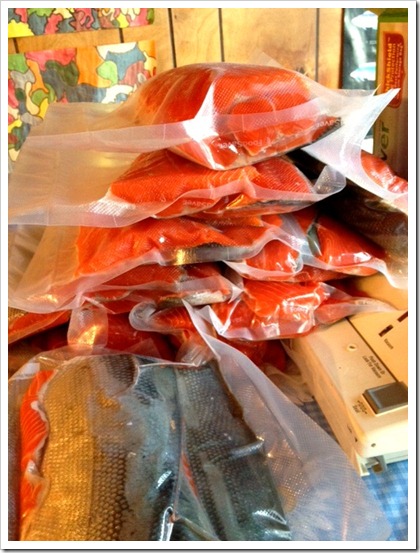 My son and I dissected several of them and looked for parasites, organs, and sex organs. He’s definitely a science nerd like his momma. Here he’s cutting out the eye to find the lens (yes, It’s kind of macabre but this is how kids learn about things and get interested). 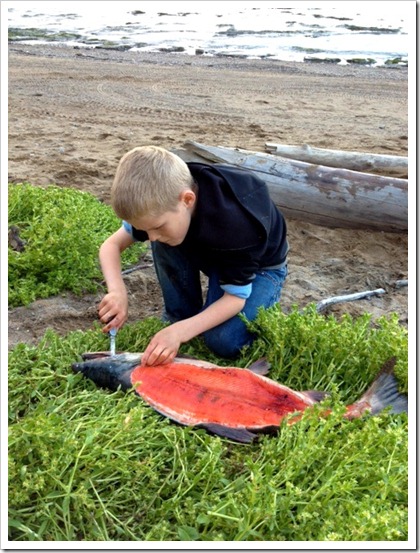 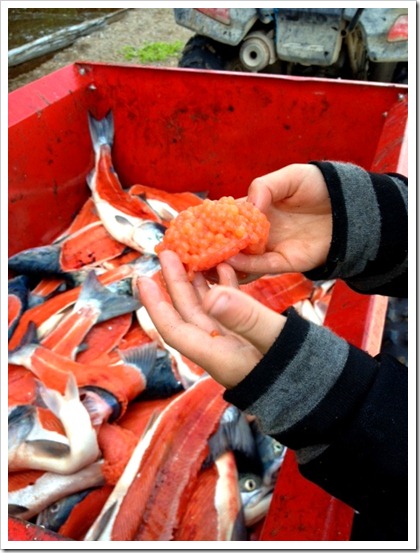 While The Men were out fishing (7am to 7pm), I watched the six kids on the beach. One of them is just a little crawling guy who eats sand so he was caged. Yes, he’s in pink. When you’re at fish camp, you wear whatever is warm. 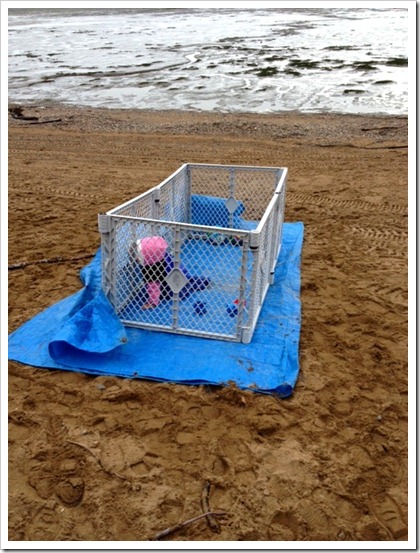 Here’s little J all cozy on the beach. He napped here for two hours and was happy as a clam. 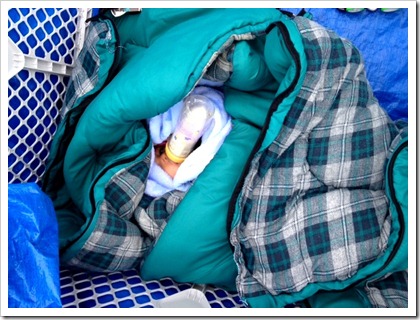 The older kids played in the sand. No, it’s not like a Florida/California hot beach. There was a steady breeze and it was about 60 degrees. 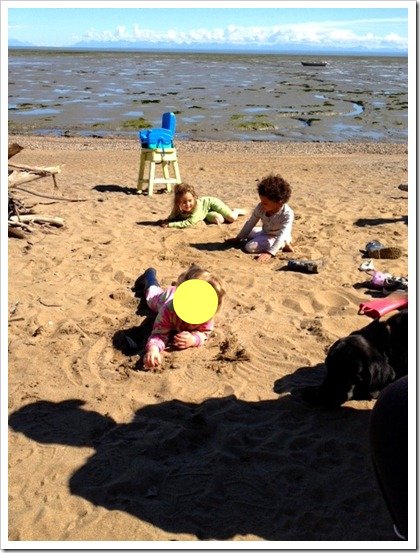 Sometimes we made boat and floated them down the creek. Remember, the water is clear, it’s just the bottom that looks bad. 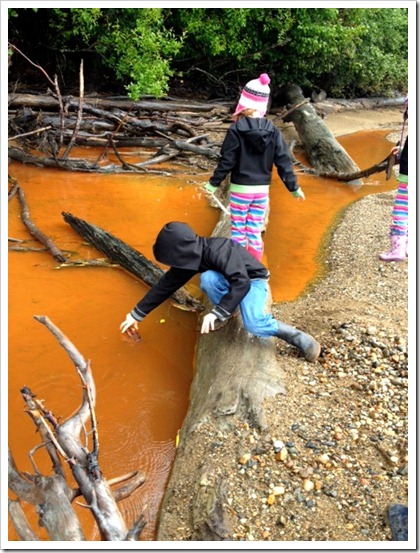 Five of the six cousins (see my son in the background?). Little man is sleeping. 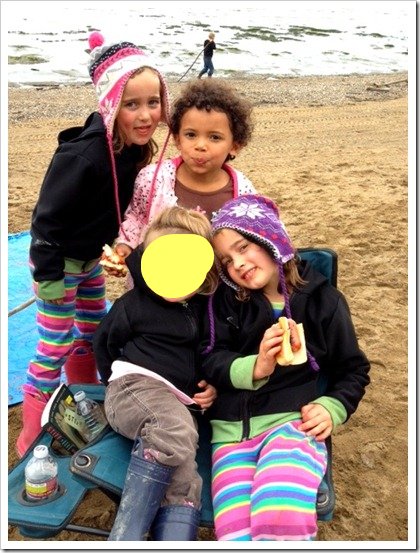 On the way back to Anchorage, we drove past the oil rig. Is Alaska not a kick-ass state?


I actually have some sewing to show you. You’ve already seen it in these pictures. Hinty, hint, hint!

*Okay, this line used to say, “Bloody corpses blow this line.” There’s a really good reason I teach middle school-age kids. When I say that typo, I actually laughed so hard, water came out my nose. I have quite the imagination.

Since I am the “crafter” of the family, I seen to get all the old stuff from everyone else’s craft room. Sometimes that means rickrack, fabric, and old patterns (all awesome). Other times that means old yarn, bent pins, and dried out Puff Paint (not awesome). Yesterday I scored big in the awesome category. First, a little history. Back in 2009, I was gifted with this Necchi Bu Mira. I thought, “cool” but wondered if it even worked. Well, she works and she has become my go-to machine for all things thick, thin, delicate, or slippery. I sew everything with it. I rarely use my 1990’s era Husqvarna Viking Madison machine. I use them both when I am topstitching a lot of stuff and sometimes use the Madison for invisible zippers but that’s about all. So my “cool” turned into a “I don’t know how I lived without this machine.” This machine is a 1950’s era machine and I just can’t tell you how much better it is than most new machines. 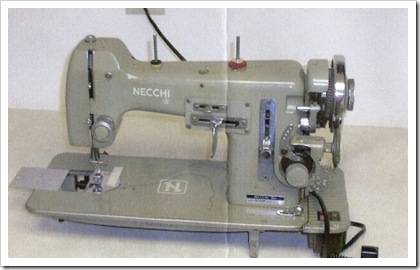 Skip forward a few years and look what I was gifted yesterday. 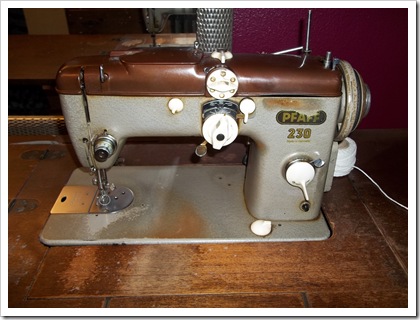 This is the old sewing machine of my fiancé's grandmother. It’s the same era but in a bit rougher shape. She used this to make wedding dresses and clothing. It’s well used but I’m hoping it’s made of the same character of the Necchi. I believe it’s also of the 1950’s era although I’m not sure. It’s a Pfaff 230 and I really don’t know much about it. It’s in it’s original cabinet too. This baby will have a nice home in my sewing room. Hell, I may even get rid of my Madison because I hardly use it now. Anyone know much about them? I did find a URL on the Pfaff website that has the manual free to print. I’ll print that off. It seems to have some decorative stitch capabilities and it was zigzag as well as straight stitch.

I took it to my local sewing machine restoration place and they will have it back to me in a week or so. I’m excited. Like so I excited I could do a little happy dance while screeching at the same time. 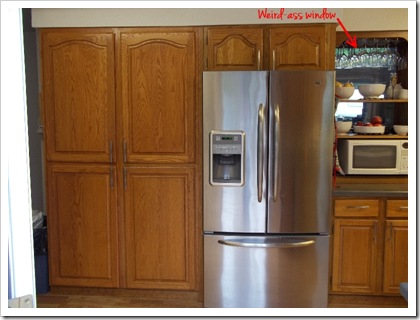 Now it looks like this. Once we get the final wall repainting done, I think it’ll look really nice. I think it’s already a huge improvement over the lovely Honey Oak cabinets. 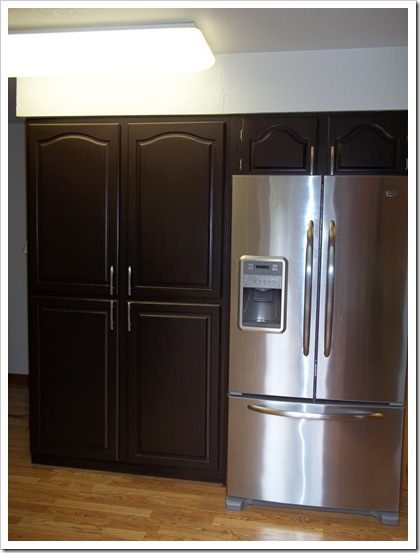 However, this is as far as I’ve gotten. Now the rest of my kitchen looks even worse when you compare the two side by side! That’s a paint job for another day though. I’ve been traveling with my kidlets up and around Alaska to see their grandparents. I’m back in Anchorage now but leaving again soon. I’m still alive and sewing a small amount but nothing for pictures. Yet! 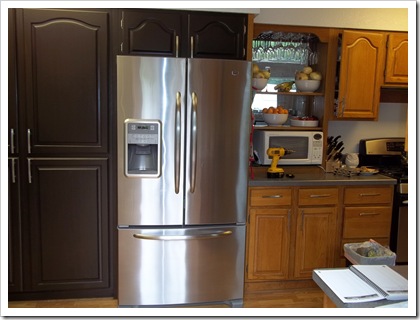 Just wanted to check in with y’all and make sure you’re still kicking! I do have an exciting thing to show you in the next day or two. Who doesn’t love a new (old) vintage machine?

So I might be addicted to this dress pattern. I used my last modification to make another cross front dress with sleeves. But, and this is a big but, I added the damn inch to the bodice. I rock so much.

Here’s another dress from San Diego Swap Meet fabric. I think I paid $2.00 for this fabric and I have another yard and a half left over.You probably also noticed that I ditched the waistband on this version too. When I was cutting, I just put the waistband pattern piece next to the dress pattern piece and cut them as one.

I used the same boatneck variation as last time.

What you can’t see in these pictures is the glittery awesome-ness of this knit. It’s subtle but it’s there! 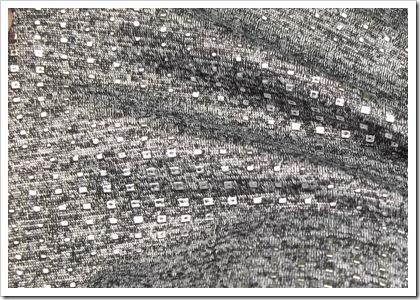 Here you can see I used self-fabric for the neck band. You can see the silver sparkles here a little bit better. 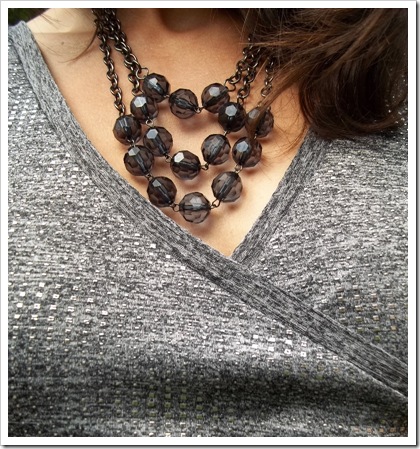 Rant Alert!
And what the hell is my camera doing? Today was overcast and gray. Not bright and sunny. Not even a tiny bit sunny. This is an unaltered photo. I’m totally washed out. I’ve tried numerous scene settings (beach, white sun, portrait, SmartCapture, etc) and they all seem to be like this. This is really more of a medium gray knit and my skin is pretty olive with an ass-load of freckles right now. Not this dreamy, washed out white. To get the pictures to look like the ones above, I’ve had to change to Brightness, Contrast, and Saturation after I load them on the computer. I’m used to doing some editing on the computer but it’s hard to see any details in these last few posts with this camera. Gaaaah. On the other hand, my inside shots of the remodel (finish photos coming soon!) look great for inside fluorescent shots. Anyone have any ideas to make it better? I have a Kodak Easy Share C183. It’s not a great camera but it’s nice enough. 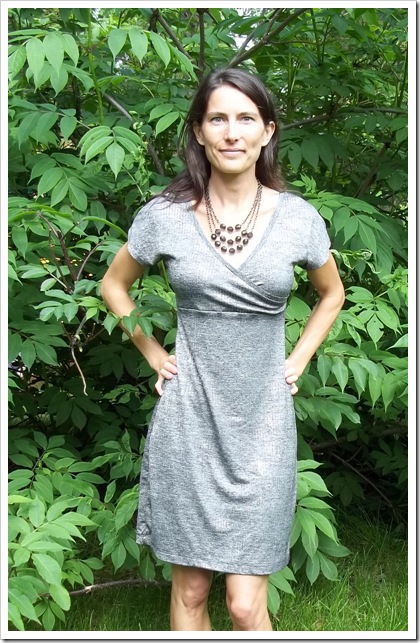