Too Much Earl Grey

I suddenly have this thing for Earl Grey tea. I used to drink it in college. Yum. That citrus-y bergamot oil is like a drug for me. I should tell you that my mom's side of the family is very sensitive to drugs, especially caffeine. I drank full-strength Earl Grey in college but then wondered why I would sweat so much at -30 and why I had a hard time modulating my volume. "Hey Kate, WHAT CLASS do you have NEXT??!?!?" I realized, after a while, that I had the same issue my mom and her father have with caffeine. It works quickly and ferociously on us. I'll burn through all my caffeine in about 20 minutes and it will leave me cranky, sweaty, and irritated. I have the same issue with Novocaine, Sudafed, and Valium. When I go to the dentist, whole face is numb for several hours. Sudafed makes me feel like I'm floating 300 miles above my body and Valium hypes me up to the point where I'm almost screaming. Fun times for the doctor. But, where the hell was I going with this?? Oh yea, so I have been drinking DECAF Earl Grey tea for the last few nights. Even decaf seems to have enough zing to hype up. In that vein, I've decided to make four pencil skirts. I am using the same pattern I used before which is 09-2008-120. I realized, when I was doing my best of 2009 post, that I wear that skirt all the time. A pencil skirt doesn't take that much fabric and I had several small pieces that just needed to be used up. Tonight I cut them all out. Tomorrow, I'll interface and perhaps sew darts. 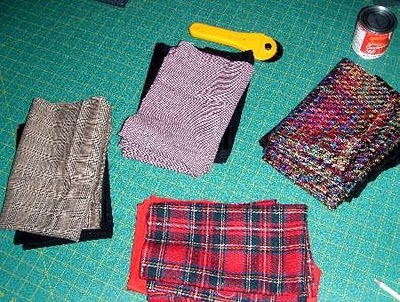 Those look great. I need to make some pencil skirts!

I too am an Earl Grey addict, but it actually makes me pretty mellow. I don't seem to be very effected by the caffeine in tea. But when I drink coffee, WATCH OUT!

Could you possibly post a link to the pattern you're using? I tried searching for it on the web but couldn't find it.

You are lucky to be that sensitive to caffeine. I wish it worked that well for me.

I see some future cuteness in those prints! Have fun powering through them with Earl!

LOL This post was quite FUNNY this morning. Kudos on the assembly line skirts. Very efficient and productive.

Wow, I drink coffee all day long, can drink it before bed, no problem. Maybe you need chamomile or "sleepy time" tea, hehe ! Looking forward to your finished items.

Caffeine has little effect on me and Valium does nearly nothing. So I'm jealous! Those pencil skirts look great...I second the pattern info request. I need to make some pencil skirts too :)

I always was a little jealous of my old neighbor who clearly had some sort of manic disorder. MAN she got a lot of stuff done!

You're post made me laugh! (Sorry, IT MADE me LAUGH!) Can't wait to see the skirts too. Whip up twenty or thirty blouses while you're at it!

I'm a complete sucker for tartan skirts and pencil skirts look so nice . . . BTW dunno if it comes in decaf but Lady Grey tea is even nicer than Earl Grey if you dare try it.

You have a cute blog and are very inspiring with all the things you really make (as opposed to "thinking" about making. But today the most inspirational part was your trim waist. I want one!! All your clothes look good on you!

Oh, those are some cute prints there!

Class Sale starts Friday AM....see anything on the newsletter that you just HAVE to do? :) Or shall I say, "how shall I twist your arm this time?" We could make bras....

I think you're just naturally caffeinated ... i.e., high energy. So it would be like someone else drinking 20 cups of coffee.

I have an earl grey problem too. I used to be able to tolerate it in college but now not so much. So I feel your pain. Good luck with the pencil skirts. I've had pretty good luck with the assembly-line method.

Ooh have you tried Lady Grey? It's like Earl, but way more citrusy. My mister is addicted to the Twinings Lady Grey, but I go for Proper Tea every time - for some reason the bergomot just tastes like I'm drinking perfume or something.

(next time you have a tea conversation you can drop the har-dee-har-har Communist "but Proper Tea is theft!" joke. Oh, it never gets old round ours...)

Hey! You already make more than anyone I read!! Now, you will really make us look like slackers! :)

4 at once is a very efficient way to whizz up a few skirts, all you need is a coffee and they'll be done in no time!

This made me laugh. Caffeine affects my mom too, even the decaf stuff.

The skirts look very nice, too!

I just finished a cup of Earl Grey..... you do know they make it decaf, right ? LOL

Some of us are not very good "druggies". I'm off the wall with caffeine - just wish I could use the "high" as productively as you. I look forward to seeing your assembly-line skirts.

Hilarious. I've written a sewing haiku for you. Enjoy!

Coffee has no effect on me whatsoever, I can drink it by the bucketload. However, a good bout of PMS hits me like that - get out of my way and let me try to multi-task my way through the house until I fall down from exhaustion. It scares the crap out of my boyfriend. I should show him your post - he'd see that while the reasons are different, it happens to others . . .

I wish caffeine would give me a little boost some times. It is probably good it doesn't or I would certainly be an addict. Looking forward to seeing your skirts.