We went to Whittier on a whirlwind camping trip. The girls were with the grandparents so it was me, my husband, and the son. We were visited by several orcas. I think we kept running into the same pod of whales. There was this big male that had a crooked and bent dorsal fin. You can't really see it well in this photo. 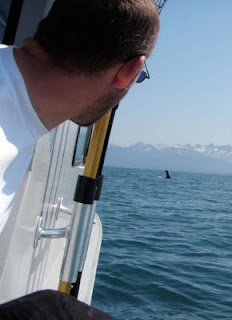 Here are his lady friends. They are much smaller and have shorter dorsal fins. We think they were chasing the sea lions. There were several sea lions that were just acting crazy. They were leaping out of the water and staying close to the boat. Usually they don't like boats. 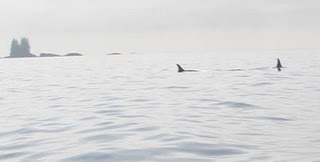 We dropped some shrimp pots and pulled up a small octopus. He's our dinner tonight. Yum. My son named him Kit. Tonight we'll be eating Kit. 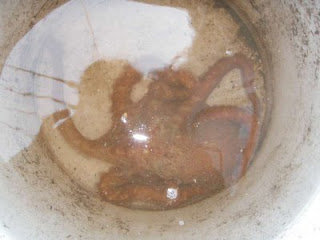 Some of the shrimp we pulled up and a very small yelloweye caught by yours truly. 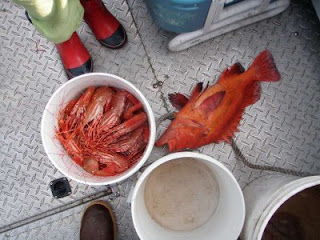 My son, the shrimp master. 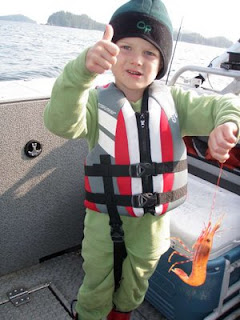 We also pulled up a bizarre sea star. I've never seen one like this. The pots were in about 500 feet of water. I would guess this thing would be a square yard if he spread out all the way. 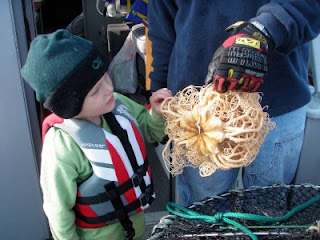 This the tunnel entrance to Whittier. See that mountain? We're going right under it. It's the longest tunnel in North America. It's only the width of a rail car so everyone comes out of Whittier and then, a half hour later, all the people go into Whittier. They have to suck out all the carbon monoxide and vent it to the top of the mountain otherwise it builds up to unsafe levels. Oh, and a train go through it a few times a day too. It carries the supplies into Whittier. They have a small gravel runway for bush planes but this tunnel is really the only way in or out. 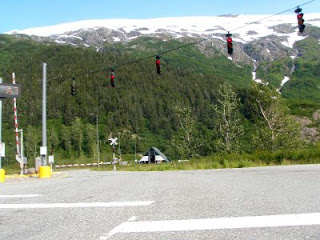 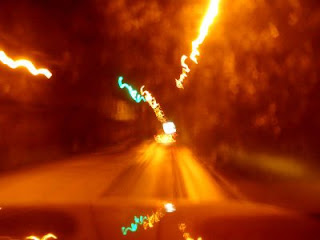 My son looooves to fish. This night he captured a jellyfish in a bucket and some kelp. 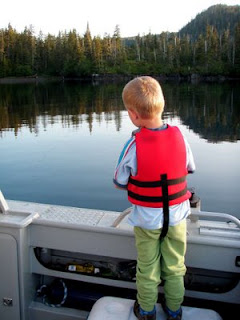 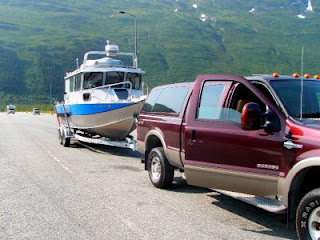 We leave tomorrow for a week long trip to Homer. We'll go clamming, fishing, camping, and visiting with all the kids.
Posted by Dawn at 4:59 PM

Nice looking catch! I'm getting hungry looking at all those shrimp!!

Looks like heaven! I swear I will make it to Alaska before I die!!! Enjoy the rest of your vacation!

I have to admit I've never really wanted to visit Alaska (I'm not a cold weather person), but your posts and photos make me think I need to come see... in the summer, of course. :-)

Not so sure about what you're eating. But the views are breathtaking.

Great pics! I would've joined you for the octopus dinner ... I can only imagine what it tastes like that fresh. Love your son's backward boots in the shrimp bucket pic. ;-)

Have a great vacation!

Great Alaska pictures and I'm so jealous of all the fresh fish!

That is some gorgeous scenery. A couple we are friends with just got back from an Alaskan cruise and they said the scenery was just indescribly amazing!!!

Ooo... what great catches! My husband visited Whittier last month on an Alaskan cruise. He told me all about the little town and sounds so neat! Have a great vacation!

Wow! My family took me whale watching for my birthday but we didn't see a one (did get in the middle of a huge school of dolphins though, which was really cool). How cool that you got to enjoy seeing some! And yum -- fresh shrimp!!!! You can keep Mr. octopus, though. ;)

LOVE the pictures! Not sure if I would eat Kit though. ;) I'm jealous of your trips.

That looks like such a fabulous trip! Keep the photos coming :)

Thanks for the pictures. They bring back memories of my wonderful vacation to Alaska. Food looks good, too. I do love shrimp. As for the rest, I'm always willing to try something new! Enjoy your next trip (and keep your camera ready!)

WOW!!!
Thanks for the eye candy!!!
Would LOVE to visit Alaska. Hopefully it will always retain it's beauty!
That is awesome that you were in the midst of orcas! I'm not I would have eaten Kit either.
The Simplicity pattern looks great.

Looks like a fun trip!
Where are the twins?