Here we are at the beginning. I'm on the right and my college roommate, K, is in the middle. The girl on the left, M, went to high school with K and we met on my first day of college too. We've done a lot together and have very fond memories of our last 15 years together. K is a nurse in the Air Force and lives in California but M lives in Anchorage with me. M also has a set of twins and a five year old. 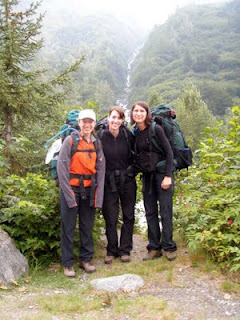 We found huge salmon berries on the first mile of the trail. 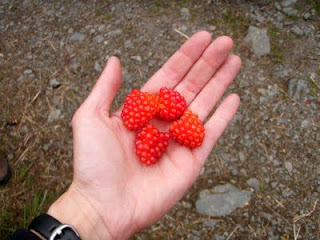 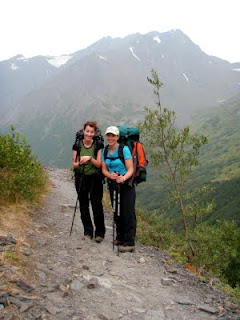 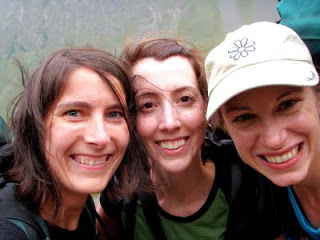 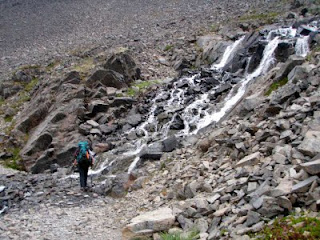 Here's the actual Crow Pass. It was really, really windy up here. We've climbed about 2000 feet at this point. 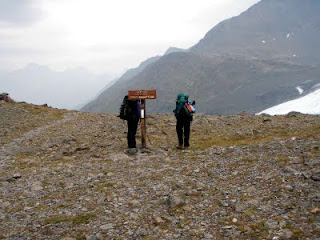 K and I with the Raven Glacier behind us. 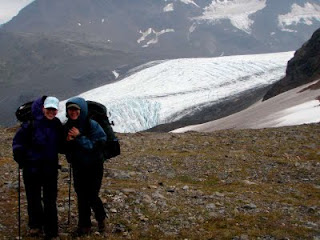 There are several of these photos because we used to do this in college all the time. On this trip, we did it at strategic points. This is in front of the glacier. 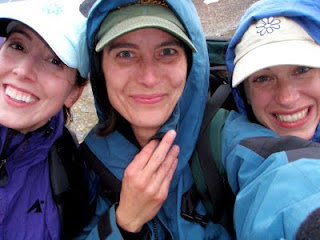 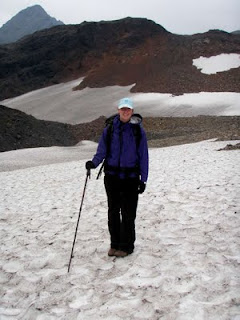 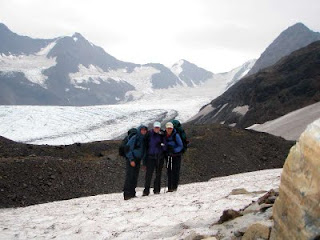 K has no kids but M and I both have three. We are all very excited to be together again and to be without kids. Can you tell? 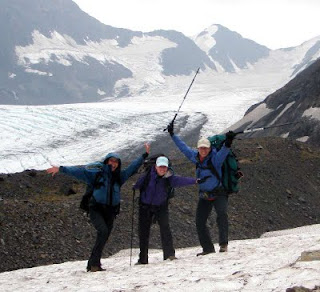 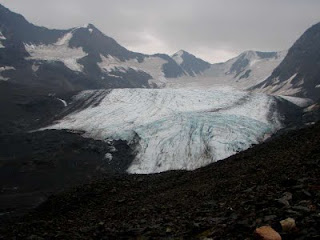 We started at the bottom of this valley down where the two mountains meet. 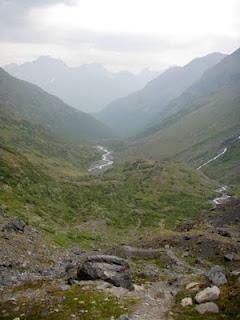 We camped next to a gorge. It was noisy but soothing. We only made it four miles in the first night because M didn't get off work until 4pm. After this point, it's a very long haul to a place where you can set up a camp. And yes, we only went four miles the first day. That means I went 22 miles the second day. Yea. Twenty-two miles. Ouch. 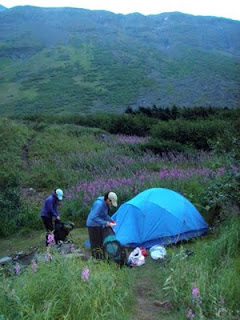 Requisite tent photo. K used to have horrible vision but got Lasik surgery courtesy of the Air Force. Now, she rubs it in. 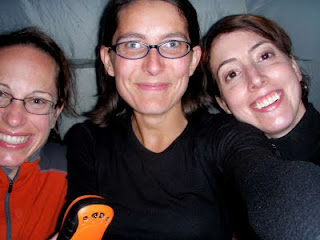 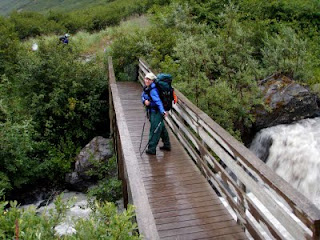 K had a way of flushing out the wildlife. This was the first moose we saw. I had a chance to take a photo. The second one was close enough I could have tossed a stone underhand and hit it. He was not happy we were so close so we moved fast. He was lowering his ears at us which is a big warning sign. I did end up packing the gun and I'm glad I did. At one point K was in front and was less than 10 feet from a grizzly bear that was standing on its hind legs. She couldn't see it because she was too close to the bushes. The bear was right behind the bushes and stood up over her basically. I saw it because she was about 10 feet in front of me. I yelled and pulled my gun. She said she wasn't scared until she looked back and saw I had the gun out. Then she knew something bad was about to happen. She ran back and stood behind me. She never did see the thing because once it figured out we were humans, it took off. Of course, the next section of trail was grass and alders over our heads and dense. We couldn't see the ground and we had to crawl under some of the trees. I kept the gun out during that part because there was bear sign everywhere and it was perfect bear habitat. That was right before the river crossing. 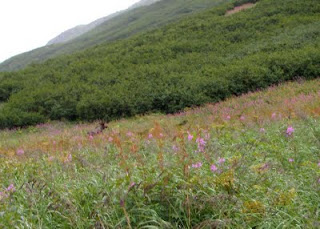 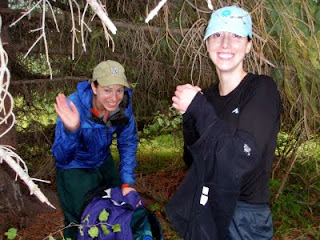 This is the river crossing we had to do. The river was a brisk 32 degrees because it comes from the glacier. We disrobed on the beach and put on shorts. It was buttock deep and faaaaaast moving. It's a good thing we've all done things like this before. 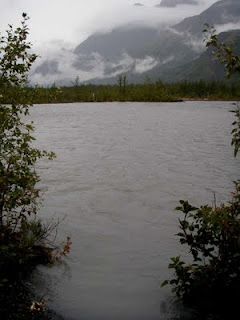 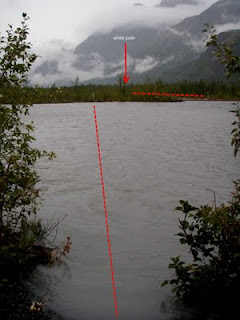 Our legs were red when we got out. These two are wincing and dancing around. 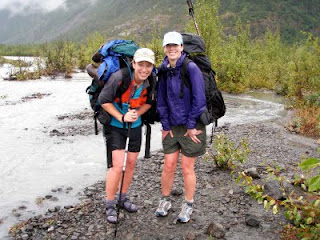 There were several rope/log bridges to cross too. Because the water level is so high right now, many of the smaller bridges were under water too. We forged those creeks too. 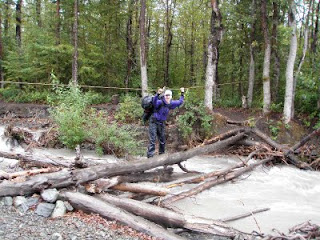 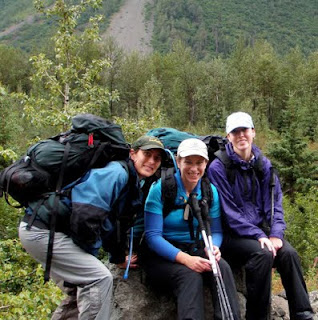 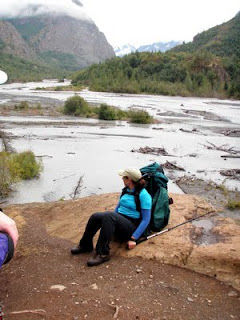 This is the end. We all had blisters from wet feet but we are happy and exhausted. 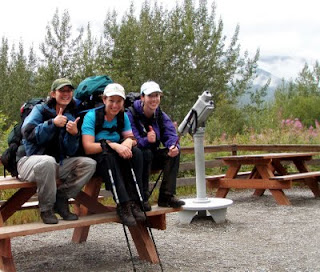 My other college roommate, J, picked us up and gave us wine. She didn't have a corkscrew because someone had borrowed it so she was using a drill. Strangely enough, J also has twins. M, J, and I all had twins within nine months of each other. If we go somewhere together it's three moms and eight kids. My son, who is five is the oldest. So, eight kids five and under. Yikes. 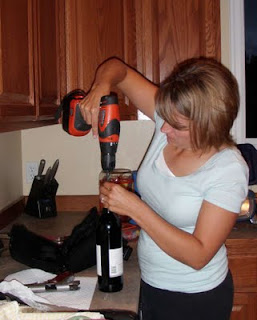 This is such a girls own adventure - bears, guns, moose, salmonberries - amazing read for an Australian. I have an Alaskan friend and each time we go camping in Australia she heads for the low growing heath (no bears) whereas every Australian heads for the dense wooded areas (no snakes). A very enjoyable post and generous for you to share such a detailed account.

Wow, Dawn, this is so impressive. I'm such a city girl, I'm totally in awe.

Phenomenal! I would love to be able to do something like that! Now get sewing! :)

Your walk sounds great - you are lucky to have such good friends to do it with.

I would love doing something like this, minus the possibility of running into bears. I'm glad you decided to take your gun! Thanks for the pictures and your detailed account, it's inspiring... I workout a lot and I like how I feel after a good long workout, so I can only imagine how great it must feel after a 2-day hike in the fresh mountain air!

What an awesome backpacking trip! Glad you all had a great & safe time. Thanks for sharing your wonderful pics. Brrrrrrr on those stream crossings!

This trip looks awesome!
Not that I could have done it!
Probably would have lost my mind and other things when I'd seen a bear!
Glad you're back in one piece!

Awesome trip! It makes me 1) desperately want to go back to Alaska and 2) hate the weather here even more - 100+ with 80% humidity is just too hot to backpack.

Great trip. I would have been the friend with the wine at the end.

Backpacking to the extreme! What good memories you all share.

You are one tough Alaskan mountain woman! Glad you were armed, and am so jealous that you had some memorable girl (and no kid) time!

What a fantastic trip! Even better that you had such terrific friends to share it with.

What an incredible trip! I almost felt like I was there with you because of your great pictures and detailed descriptions. I would love that trip! I'm just not sure that I could handle that freezing river crossing, but then anything for fun, huh?

Wow, such a contrast to my scenes of NYC. But take away the glaciers and you have northern Maine with bears and moose. I've seen moose in the wild in Maine and they are scary beasts.

I imagine K does not have kids as she is afraid of having twins!

Wow, I am in awe. Girlfriend time is so important. Glad you got some before school starts.

That trip sounds like utter torture to me. I climbed to the top of Mt. St. Helen's right after I got out of high school and that was plenty of a hike for me. I made it to the top and what do you know, I forgot to pack my camera and didn't realize it until I got up there. There was a group of us and I'm sure there are pictures in someone's album, but that was before the days of digital (well I'm not *that* old, it was just 15 years ago!). Glad you had fun. :-)

Wow, what an adventure!Sounds like a lot of fun....

What an incredible, memorable trip. You lost me at the wading in the frozen water, though. The moose and bear wouldn't scare me half as much as that nasty cold on raw skin! How the heck did you not get hypothermia? Thanks for the incredible visual journey you shared with us all.

Thank you so much for sharing your adventure, it is so amazing and so beautiful.

I'm sitting here in urban London feeling like I shared your experience of friendship, stunning landscape and drilling out the cork. Some of it familiar (eg drilling for wine), and some alien (eg having a gun). And all before breakfast! Thanks for enriching my weekend.

YIKES! As beautiful as the country is, there is no WAY I could be tempted to go hiking anywhere a gun is possibly needed! Here in New Zealand you can fend off everything poisonous with bug spray - no snakes, no bears, no big cats. (There are rumoured to be moose hiding in the wilderness, but nobody's found one).

Thank goodness for blogland, where other people do these amazing hikes and post photos and descriptions so I can vicariously enjoy them.

I need to get me one of those Wine Bottle Openers. What time does Home Depot open?
Nice trip, such beautiful country, and good friends togther. Looks like a good time was had, no bear maulings is a good thing, too.

OH - I am so freakin' jealous. The only thing I want to do in life is see a real live moose - not a picture, but a real one.

The scenery looks fabulous. What a great time you girls had. g

Thanks so much for sharing this, it sounds wonderful.

I thought the bear incident sounded scary -- grizzlies! yikes. Where I've been camping with bears they run away if you bang pots at them. But then I read the even scarier "3 moms, 8 kids under 5." Grizzlies got nothing on that.

That sounds like an amazing trip --- quite an adventure!

thanks for sharing and the wonderful photos! I'm jealous!