So, crappy sewing week here. I made a pair of pants. It's a pattern that I've used before. It turns out, with all this running, my butt has rearranged itself and gotten bigger. Lovely. I made these Jalie pants before and they fit fine. The first version was a bit tight and the second version was a bit loose. This time I cut an in-between size and it's too small. Not like, "Whoa, I can't sit down in these" but instead "Holy shit, these pants are an inch and a half from zipping!" So. I've been pondering this the last couple of days and doing a lot of rear-end examining. First off, by no means do I think I'm fat. I don't want you to get that impression. My weight hasn't changed but I think it has rearranged itself. I've really been doing a lot of speed work this summer and I've increased my time by about a two minutes a mile. Yes, it sounds impressive but it's not really. Last year when I was doing this training, I was running with a friend who was decidedly a non-runner. It was her first year running and I was more interested in being supportive than being fast. Because I was being supportive, I was running at her pace which is much slower than mine. She has picked up a different running buddy because she moved a ways away and I am now running with a different, much more competitive, friend. We have really cranked up the intensity and I feel really strong right now. But, my butt is apparently feeling strong too. The pants are not finished but I think I'll hold on to them for a while and see if things rearrange themselves this winter when I'm not doing intervals training. We'll see. The half-marathon is Sunday so wish me luck. I want to do it under two hours.
On another front, my Vogue couture jacket has really been bothering me. I hate having unfinished things hanging over my head. After I posted the almost-finished jacket on my blog, my instructor called and said that I need to unpick the arms and lower the armhole a little bit. I thought about it. A lot. I agree but (1) I've already sewn the sleeves in permanently (two lines of stitches), (2) cut the seam allowances for the under arm, and (3) don't want to damage the fabric any more than I have already. Right now I'm trying to decide what to do. I think I'm just going to leave the arms alone. Yes, I know it's not perfect but I see more jackets in my future. But, having this jacket in my sewing room is just bringing me down every time I see it. I would rather have it finished even if it's not perfect. I still learned a lot from this class whether my arms are perfect or not. Now that it's decided, I already feel better. Whew.
I'm currently working on a shirtdress and it's giving me fits too. I can't seen to apply the collar and the points look like crap. Maybe I just need to take a sewing break for a couple of days. I have the will but the way is eluding me right now. I love the fabric so I will keep working on this to the bitter end but it's killing me a little inside to be having all these problems. Okay, too dramatic but you get the idea.
I have not forgotten that I owe you guys a waistband tutorial from this skirt. It's coming but school started yesterday so I haven't had much time to think it out and write it down. To prove it to you, here's a picture. 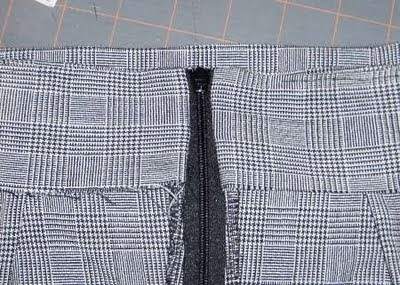 Hey - good to see you survived work this week.
About the pants, maybe adding a piece of bias fabric to the sides will add the extra you need and look pretty cool, too.
Tough one on the jacket but I support you in not tearing it apart - you are too far gone to go backwards now. I'll let you know how my sleeves go when I finally get back to working on mine.

Great job on the running and the speed work. Also, good luck with the half marathon.

I totally understand your decision on the jacket, I would do the same thing. It is all a learning curve.

Completely as an aside, would you consider posting photos of your sewing room? For someone so super organised, I would love to see what it looks like! Good luck for the marathon!

Sorry about the pants, but I think you're right on the money about things rearranging themselves in a couple months. I agree about the jacket, too, there's a point where you just say "Good enough!" and keep your sanity (and fabric) in check. I'm thinking that the success with the shirtdress is connected to the first week of school, because I am so exhausted that first week that my concentration is off, my stress is high, and my patience is shot. I'm sure it will all come together fine! Hang in there!!!

Good Luck with your half. They are my favorite races. And yes-your entire body is about to shift during the next decade,running or no running.Like tectonic plates-some great shifts,some not so great. As for the jacket-chalk it up to experience-you have already learned enough from the project and keep your sanity intact.I am all about the mental health and well being that my sewing provides...... :)

Good luck on Sunday! Great way to take your mind off of the sewing projects. I would do the same thing with the jacket --- there will be others!

"Perfection is the enemy of good enough." Hey, the sleeves will be perfect on the next one.

Speaking as a middle aged person, be glad and appreciate the butt while you have it. It will disappear when you are older, and it leaves no cushion for sitting when you need it the most. Particularly on a thin person like yourself. Ouch, my 91 YO mother has no butt. If I were a nice enough and patient enough daughter, I would make her some custom pants, using two fronts instead of a front and back pattern. :-)

I think you should get a free pass...it's the first week of school! Mine starts in a couple of weeks, and all I have energy for is to come home and crash on the couch.
For the collar - find a good book and do all the understitching, grading/beveling, pressing that they say. But take a break and sew a quick knit top first.
Good luck with the half,
Jodie

I have those weeks too where nothing seems to work right. I solve it by hiding the projects, and working on something easy to get me back in the swing...

I'm sure with your figure the pants look great, no matter where yoour butt is. :)

When I first started running, it was my thighs that changed. I don't even worry about it because things don't jiggle, so there's our trade off.

I have the same problem with butt rearrangement. You might find it's sitting higher than before. I've also found that my thighs are more muscular and with these two things combined, I can't actually pull tight pants on as far as I could before so they don't zip up.

Just a tip on the half-marathon. Hold yourself back at the beginning. I know it's hard but you will have more left to give at the end!!! Have fun, can't wait to hear about your time. I'm sure you will finish in a lot less than two hours. Good Luck!!!! Kathy

Ooh, can't wait for the tutorial. I can't make heads or tails of Kathleen Fasinella's website and usually come away feeling incredibly stupid.

Good luck in the half marathon! I can't believe all you have done while training, being a mom, and going back to school!