Well, I made another fruit. This one is the pear and I used the Chocolate Lollipop fabric from this post. I used pink variagated Maxi-Lock thread for the the veins on the leaves. 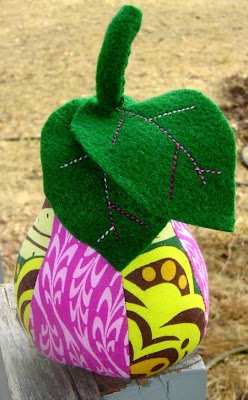 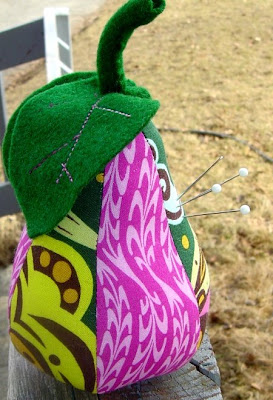 You don't tuft this one so there is no button on the bottom. You probably could but you would need a very loooong needle. 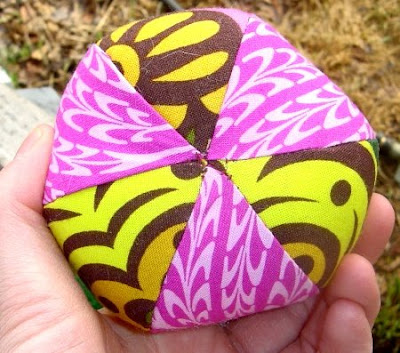 I made this one for Paulette. She said the last one was cute and she is the only reason I am taking that Couture Jacket class. 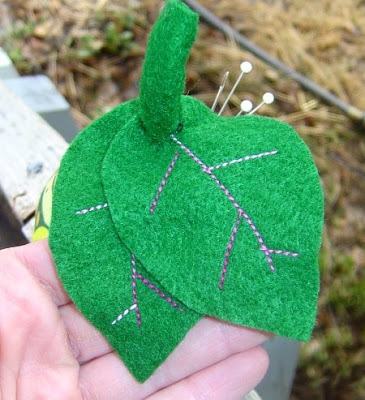 Non-Sewing Items (Stop now if you don't want to know . . .)
It's been really nice the past two days; in the 60s! I "lost" a twin yesterday. After looking in all the neighbors' backyards I came inside and there she was, passed out on the couch. She slept like that for two hours before I woke her up. My kids are not used to this heatwave. And no, I don't encourage them to eat dirt. 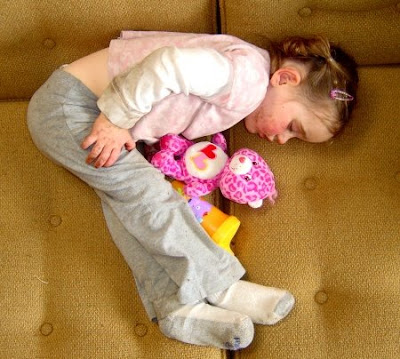 Also, I went to court today and the six month stalking order was granted by the court. The other party actually showed up and had a lawyer. Weird. They almost behaved themselves too. They only called me a bitch twice in court.
Posted by Dawn at 6:05 PM

Very cute. BTW, I finally figured out how to view the contests, and even found a list of all the contests planned for the year! I get information overload at PR's site. Thanks for the heads up.

I like your picks, and although dupioni is one of my favorite fabrics, it does tend to be more formal looking IMHO. I made a dress for dd 2 springs ago. It was for Confirmation, but I was hoping she would wear it for church, but unfortunately, she tells me it's too dressy. I actually have quite a few pieces of it, but am hesitant to use it except for more formal ocassions. Now we live in a very laid-back part of the country, so maybe she wouldn't feel that way in the Northeast?

Amanda,
Please clue me in. I've been checking out PR lately also, thinking it would be an opportune time for me to do a contest, and I was thinking a mini-wardrobe, or an endless combo type would be up my alley. Well, I can't see anything on PR other that past or current contests, and it didn't used to be this way. Where do I go to see upcoming contests?

Cute pear - I made something similar and used a doll making needle to pull through the centre. I use them as decorations. They are made out of felt and are embroidered.
Aren't kids great - yuou really worry when it is all quiet!

Those pincushions are adorable - now it's all your fault that I want one! I used to worry when the kids were quiet too...are they burning down the house? Eating glass? now they are grown up...but I still check up on them

Great pear, so cute! So is your dirty little kid! DD must be growing!!!

Love your blog and all the amazing sewing you do! Very inspiring! It's also fascinating to hear about life in Alaska.
I couldn't find anywhere to email you, but I wondered if you knew about this: http://www.feelingstitchy.com/2009/04/all-too-similar.html
I ask because I found Urban Threads through your blog and have bought a few of their patterns. Not sure if I will in the future... I love my embroidery machine, but it is hard to find cool patterns, so I'm very disappointed.
Keep up the great work!

Sounds like your stalker was very restrained in court! ;) Love the pear. How old are your twins?

The twin looks angelic even with the dirty face. Your pears cute. Keep safe from the neighbors.

Just wanted to post a follow-up to my earlier comment. Urban Threads has a response to the drama I linked before, in case anyone is interested: http://www.urbanthreads.com/content/view/326/

Your solo twin is just precious.

I would be a jumbled mess of nerves if I had problems like that with my neighbors. I wish I had your ability to keep things in perspective!