Well, it's no-sew time for me again. We've been in Homer for a week camping, clamming, fishing, and hiking. There is nothing to rev up your sewing mojo like a lack of time to sew. I'm feelin' the itch bad.

We spent several afternoons on the Homer beach. Yes, my kids are wearing coats and long pants. It is warm by Alaskan standards but wet kids, wind, and temperatures in the sixties make for cold little kids. They had a ball trying to stay out of the water and picking up random beach things. 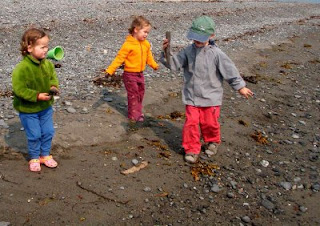 We spent a day fishing for halibut. I need one of those grandpa shirts. You know, the ones that say, "My grandparents went all the way to ________ and all he brought me was this damn t-shirt." You've seen those shirts right? Well I went all the way to Homer and all I caught was damn cod. They are good to eat but wormy. They are so parasitized that several of the fillets were reduced to thumb-sized chunks. Eating roundworms is not one of my favorite things. We know, of course, that we didn't get all the roundworms out of the meat. You just try not to look too closely when you eat it. It's the same with all cod, even the stuff you buy at the store. Cod is a heavily parasitized fish. Period. Next time you eat cod, try not to think about it. So, this is girl #2 with her first cod catch. We caught about 25 of the things. They wouldn't stop getting caught.
ETA: Sorry to make you guys not want to eat cod. I shouldn't also tell you that halibut is heavily parasitized too. Well, salmon too. Parasites are a part of life. You, in fact, have parasites all over you. As long as you cook it well, you'll be fine. Any game meat can be subject to worms too. That's part of the reason why you cook them to a certain temperature. 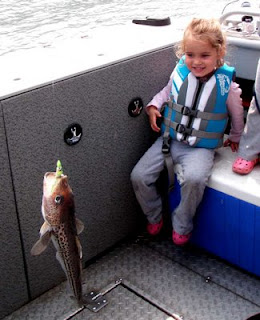 This is girl #1 with her cod. It's almost as long as she is. 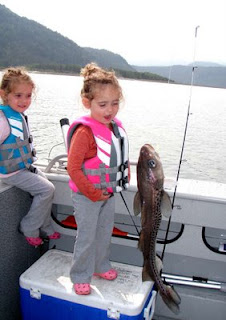 We spent a day inside of Halibut Cove and rented a Forest Service cabin. Only about 5% of Alaska is owned by private individuals. They other 95% is owned by state and federal governments. Much of this land is parks, preserves, and national forest land. While you can not buy this land, the Forest Service has set up a cabin system over much of Alaska. You can hike, bike, or fly into remote regions and stay in these cabins. They are very basic but in places you could not stay otherwise. The cabins I have been in have a wood stove, table, bunk beds, and benches in them. You "rent" the cabin by signing up on the web and paying your $65/night. You can barely see the roof of our cabin if you look closely. 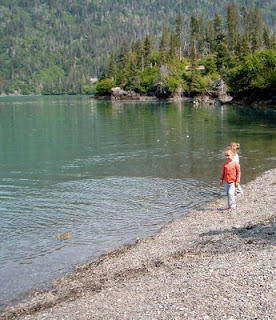 We took a .25mile hike to this rocky beach. My son fell in the water, of course. 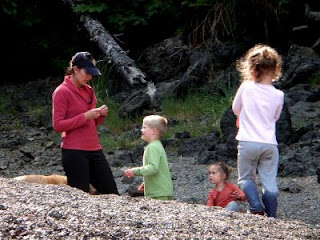 He's about to go in. I didn't get a picture of him falling into the water but it was pretty funny. We made him get naked on the beach and we wrung out his clothing. Thank goodness for microfleece. It dries quickly and keeps a person warm even if it's wet. 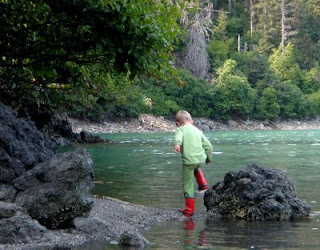 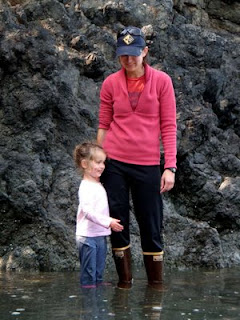 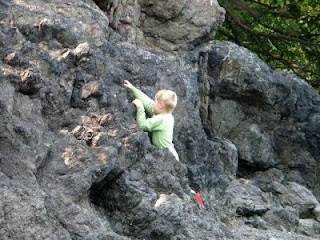 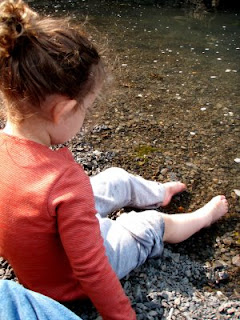 Here's our cabin. It was quite a task hauling our gear up and down this set of steps. 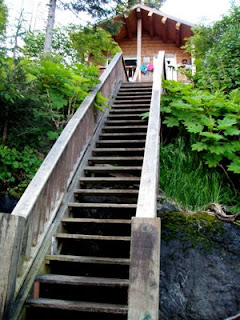 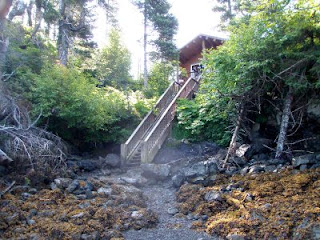 When we left the cabin we found this fantastic little beach that was swarming with starfish and clams. What is my son doing with his face?? Sigh. 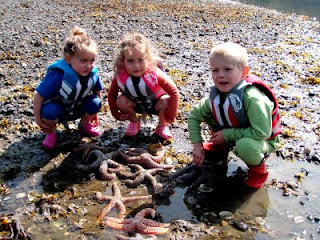 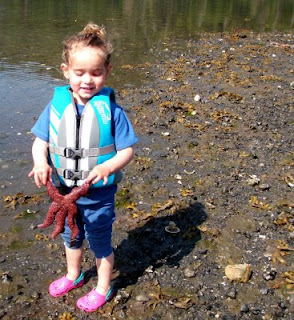 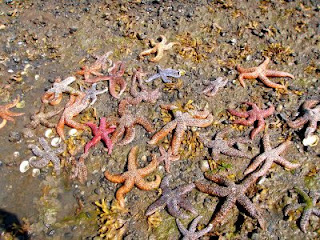 Daughter #1 was in love with the starfish. 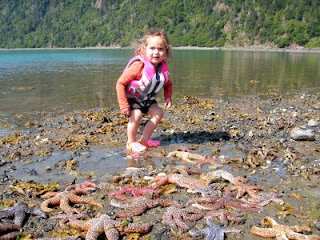 Me? I was in love with the clams. 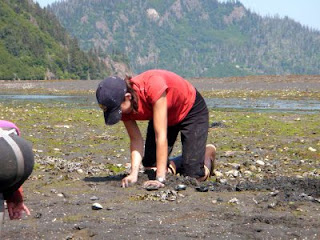 We boiled and cleaned these puppies that night. We bagged and froze them for clam chowder. Well, not before we ate a few. 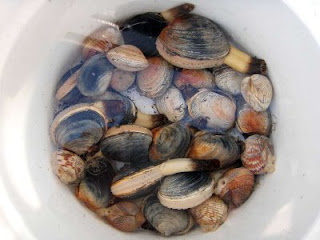 This was after clamming. My favorite part of this picture is that she fell asleep while playing with her toy. Her sister fell asleep the same way about an hour later. It was peaceful. 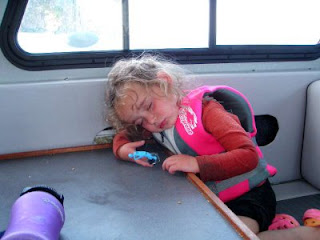 So, I wish I could say, "I'm'a gonna whip up some sewing tomorrow!" but I can't. I have to run 10 miles, unpack the boat and car, finish my handsewing on my collar, do 78 loads of laundry before packing the truck again. Monday, I'm leaving to go to Fairbanks for a week to see family. Ugh. Maybe a fast knit top is in order. Maybe I can sneak it in. My husband says I get ornery when I don't sew. Maybe I'll convince him it's better for him if I sew something.
Posted by Dawn at 7:05 PM

The starfish! How pretty, I had no idea they were different colors.

Dawn, you have totally put me off eating at Captain D's ever again. I love Cod, but I'll never get your words out of my mind. YUCK!

Wow, I have never seen so many starfish before!

The starfish are gorgeous! I vow to never eat cod again. Done and done.

The Alaska tourism bureau should pay you for the advertising. :-) Those starfish look enormous!

Thank you for sharing your photos -It is really interesting & so different to here! Hope you get to your machine soon - I understand your pain!

Thanks for posting the photos. I feel like I had a vicarious Alaska vacation. No cod for me either.

Hope you get time for the quick knit.

Jenny's right, the state owes you a "Come to Alaska!" check... Hope you get to do a little sewing, ornery Dawn sounds mean!!!

The sixties sounds wonderful. It's been over 100 degress for a week and suppose to stay there for the next week. The kids are adorable. But the worm info was more than I care to hear. Gross. Good thing I'm not a fish lover. Yuck

Wow, what a beautiful place to stay. Uggh. I ate cod last night, but now I don't think I'll buy it again. Those starfish are amazing--they are so big and colorful. No wonder your daughter loved them.
BeccaA

Gorgeous pictures! Of course it made me very homesick for my sister, who no doubt was on the Homer beach with her kids too! I was thinking about you yesterday while I was sewing, wondering if you were missing it while on vacation because that's what happened to me last weekend!

Um, yuck to the cod/roundworms -- I had no idea. Our son is a halibut/salmon snob -- HAS to be from Alaska and FRESH, but we get a fairly good supply so we're okay. :)

My husband will ask when I ate last and if it was recent, he'll ask do you need some time in your studio. Usually that's a nice way of saying you're being a bag - LOL.

Alaska is so beautiful! The State Tourism Board owes you a check. You should get to sew something as a reward

Thanks for showing us pictures of beautiful Alaska, children, starfish, and you in pink. (Hope I didn't miss anything) Now I know why I never liked Cod but love most fish (all in the cooking, huh?) Here's to a happy Dawn who sneeks in some sewing!!!

My 14-year-old son has a new fascination with all things Alaska and he really enjoyed this post. Every day I have to listen to him talk about his burning desire to visit Alaska. (You think they're repetitive when they're little? It doesn't stop when they get older.)

Those starfish are so beautiful. What a find!

My DH says the same about me. But I have been sewing so much for so long that he hasn't said it in a long time. He just let's me go and opens a beer.

Just saw this and showed it to my boys. Thanks so much! They loved the pictures!

Hi there. I lurk at your blog quite a bit 'cos I'm jealous of all the great stuff you sew.

I was interested to read that fish are so full of parasites. I never see anything suspect in the fish we buy from the shops.