I made aprons before using this pattern. New house = new aprons.

Me: What the hell* are you two doing?
Floral Kid: Flipping pancakes! Look at my stern-concentrate-y face!!!
Pink Kid: Testing the batter, Mom! Just like you do! 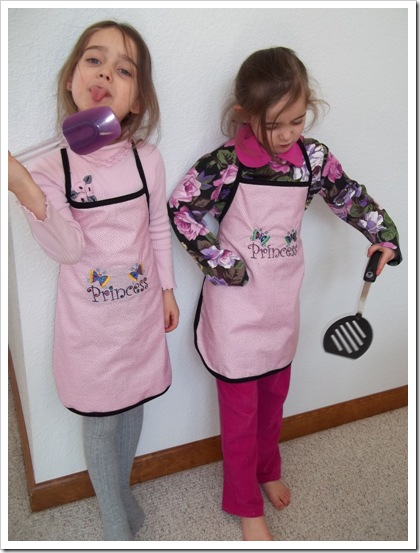 Me: What the hell are you two doing now?
Pink Kid: Mom!!! Don’t you know the photo rules? Every time we have to pose, we get to do a Crazy Pose too!!!
Floral Kid: Ha-thum-it-ha-thum! (I think her tongue was in the way) 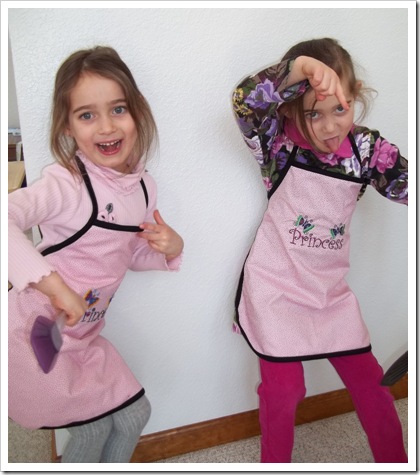 I used an embroidery from Emblibrary.com. I added some bling to them because, duh, they are girls and need shiny things. 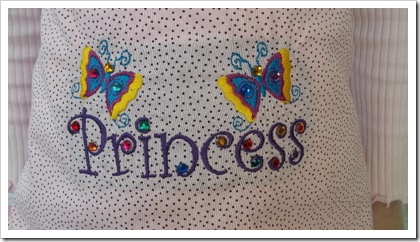 I bought this glue the other day at JoAnn’s and I’m less than impressed. I’ve had some of the sparkles come off already. Do you guys know if those hot fix crystals stick on any better?? Does anyone know a good solution? I can see lots of sparkles in my future with three divas (four if you count me) in the house.

This embroidery was a freebie from EmbroiderThis.com. 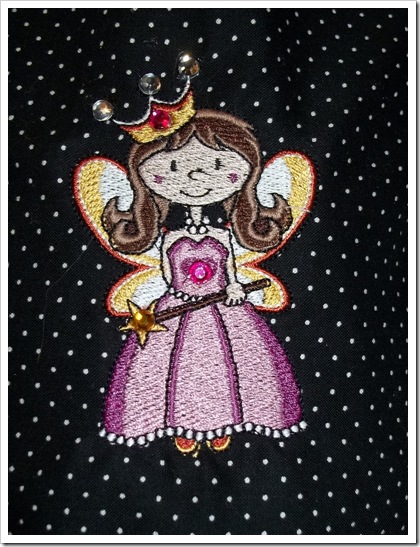 * I NEVER swear in front of my kids (or at them for that matter). Really, I don’t. But, it’s so much fun to put into print what my brain is really saying. In reality I think I said, “What in the world are you two crazy people doing?”

The hot fix crystals do work great. I put them on my Granddaughters outfits often and rarely have to replace them. That said I have a front loader washer and mostly line dry so I don't know if that helps or not.

I use the hotfix crystals all the time and have never had a problem. I would wash the garments inside out if possible.

I have used the hot fix with my little wand many times, the crystals stayed on longer than the outfits lasted (out-grew them). I also used the iron-on crystals those too amazingly lasted too! The aprons are cutie!! Especially with those CUTE little models ;-)

and your son thought he was outnumbered Before!

Lovely. I iron on the jewels. They mostly stay on. If they come off, I have a few more to add.

Cute aprons! The stepdaughter is calling you mom already???

Hot fix crystals work really good but you've got to be sure where you want them. Once heated and put on the fabric they aren't going to move. If I need a little working time, I use E6000 glue. Nothing else holds like these 2.

All your little princesses are adorable. And so many opportunities to sew girlish stuff!

I use hot fix crystals. I iron them on with a Kandi. I use high quality crystals, even on the kiddies outfits. Momsy can wash AND dry (inside out if you please on gentle and low) and they stay put! However, to be honest, Dearly Beloved does my laundry. Sparkles and all get washed with "colors" and dried with Perm Press. Guess what? Sparkles still there, three years later! Keys: High quality, follow directions, set up time, clean fabric (no sizing, softeners, etc) before application. Good Luck!