Duvet Tutorial or “Make Your Own Damn Duvet!”

Aren’t you tired of really expensive duvets? I have been looking for a while but couldn’t find anything that I loved, ya know? I mean, even on clearance they are upwards of $80 for a king-sized duvet. I made my own this weekend and several people emailed me and asked for a little tutorial. I drew one for you. I know, me? Draw? The pictures aren’t that awesome but I think they get the point across. If not, leave a comment and I’ll try to clarify. I know some people don’t like other people to pin things on Pinterest but, if you want to pin this so you can find it later, Pin Away, I say! 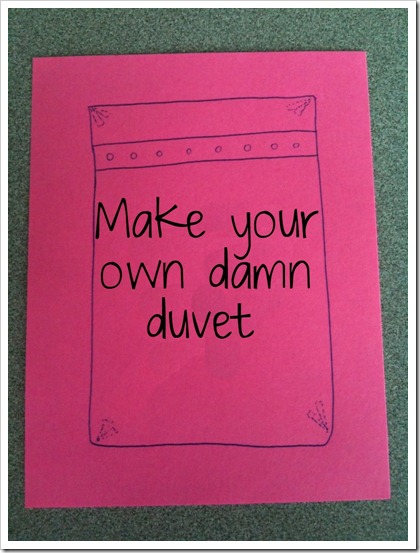 I used two king-sized sheets because I was making a duvet for a king-sized comforter. I have also made twin-sized duvets for my, wait for it, twin girls. Always wash and dry before you sew it. That way, it won’t shrink when you wash it after it’s been on the bed for a while. Nice drawing, eh? That’s a sheet. 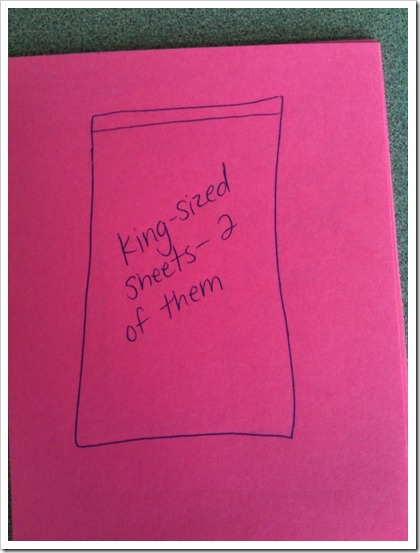 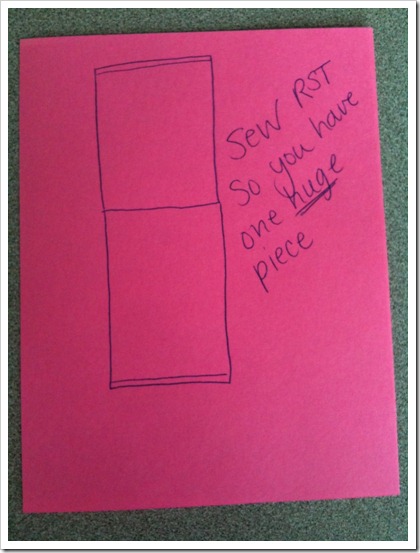 I fold over the edges of the sheet so my buttons and buttonholes are in several layers of fabric. 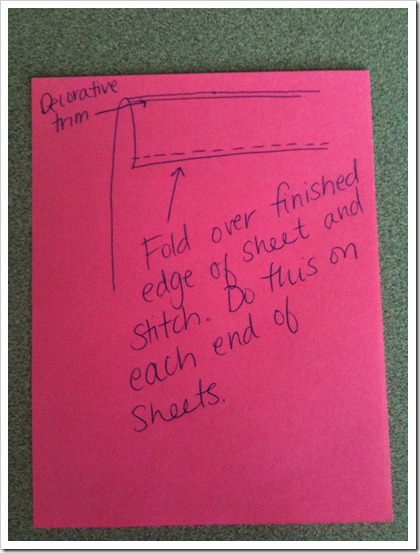 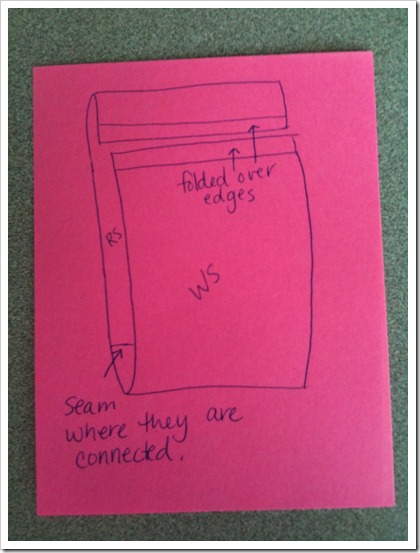 I hope this picture makes sense. 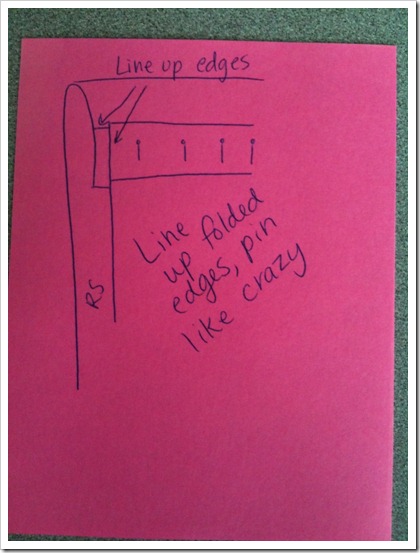 My two sheets were four inches different side to side. You probably want to check the width/length of your sheets because they may be different. I actually laid mine out on the floor and pinned the be-jesus out of it. 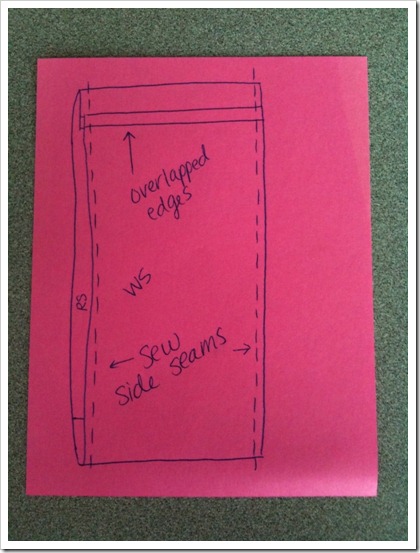 All that’s left is the buttons and buttonholes. 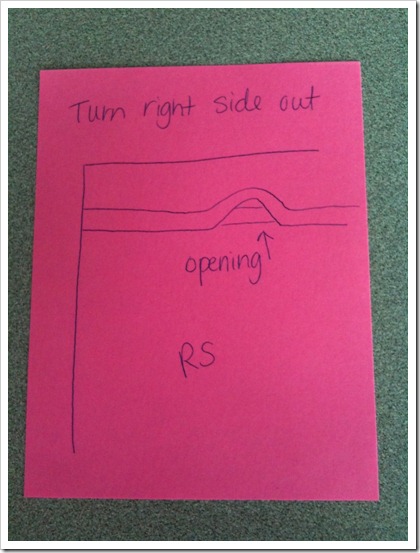 I sew ties to the inside corners of the duvet and the comforter. That way, I can tie the corners together to help keep the duvet in one spot. 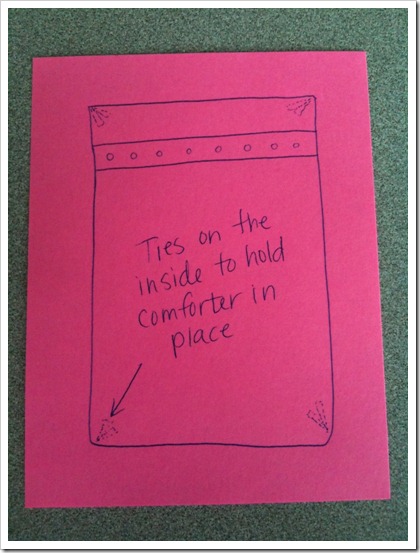 There! You made your own damn duvet now too. Like I said, if the crudely drawn pictures aren’t working for you, let me know in the comments section and I can clarify for you. Happy sewing!

Your hand-drawn diagrams are perfect! Simple, and easy to visualize with fabric. Brilliant to fold over the trim for a stabilized button/buttonhole placket, as are the inside ties and corner ties on the comforter.
Thanks for sharing your great ideas!

Great tutorial, your pics make perfect sense! Just one question about the ties inside... How do they keep the comforter in place? How do the ties attach to the comforter? Pardon my dense-ness, I've never owned a duvet! Thanks!!

Good tutorial. Makes perfect sense. Thanks for sharing such a great idea!

Super, makes sense to me! Pinned and Thanks

The ties are the cleveress of idea!!! I must do that on my duvet! Thanks. I keep your tutorial in mind too because, like you said, what we find on the market is so ugly and expensive!

Dawn, you are my hero! I have soooo many flat sheets just sitting in my cupboard, because I only put a fitted sheet on the bed and everything comes in a set.

Thanks to you, I will now have some thrifty duvet covers :-)

Thanks for taking the time to do this. This really has been on my to-do list for a while. So simple really, but this will help me get it done.

What size are your buttons and how far apart are they?

That was a pretty awesome tutorial! Thanks for writing it. I liked your drawings (and your handwriting too!)

Wow, this is great thanks for sharing!! My sons is falling apart on me and he needs a new one!!

Instead of sewing, could you use the material sticky tape?

I would also love the answer to this question, thanks so much for taking the time to draw everything out for all of us!

Love your low-tech tutorial. Works great, now I'm going to keep an eye out for some cute sheets.

Pin the be-jesus out of it. :) I love that. I am definitely going to try this for my queen comforter. I like to change things up periodically but it's way too expensive to keep buying different comforter covers all the time!

Use snap tape instead of buttons and buttonholes. Small pieces of snap tape also work wonderfully in the corners of the duvet and the comforter.

Love the ties in the corners. Can't remember the last time, if ever, that I've seen "be-jesus" inprint ; ~ ))

my daughter always wants to change up her room this is great!!! thanks

:) Good drawing I like the "ties" one best lol great idea I have done this for years with used sheets for change only I used ties instead of buttons... but never thought of ties to hold the comforter in place.. makes me wonder where my brain is sometimes!

Best tutorial ever - and with a slice of comedy! Love it! I actually just got some material to do the same thing. I hate how expensive duvet covers are. It's ridiculous.

So full sheets for full duvet??? And its pretty clear I quess laugh!!!

Thank you for this great tutorial! Your tutorial helped in my latest project - A Chevron Quilted Duvet Cover. I
wrote about it on my blog and gave you credit for the tutorial. I would
love for you to stop by and check it out. Grab a feature button as well
if you would like. Thanks again!
http://www.thecraftyblogstalker.com/2013/02/diy-quilted-chevron-duvet-cover_21.html

there is a quick video:
http://www.youtube.com/watch?v=nycX9xYoJmY

My mom did a duvet cover from sheets for me when I was a kid, ahem, about 30 years ago. She also used sheets to make matching curtains and a lampshade too. You've inspired me to try again!

I've been shopping for a new duvet for over two years.. maybe longer! Last one I bought was "sheet material" from Target and loved it. I now refer to it as "Frank" because I've stitched it up so many times. Yes, that is short for Frankenstein. lol Haven't been able to find one in the right material.. or if it was then it wasn't the right color scheme. I've thought about this, but I don't sew.. thanks for the tutorial! Excited to go buy some sheets and retire poor Frank. :)

the ties are actually optional. if your comforter is the right size it will stay secured inside the duvet w/o being bunched too much. if bunching occurs, a quick shake and BAM! back to normal. I just used old comforters rather than buying new ones to stuff my duvets. :)

Where do you find flat sheets that are not a part of a pricey set? thanks

I think I bought these at Walmart when they were on clearance. They were only $7 ($8, maybe?) per flat sheet and I needed two per duvet. I've seen similar things at Target for about that much.

Brilliant! I came to the same conclusion awhile back. But my inspiration was a beautiful black and white drapery panel (from Target) that I bought at a thrift shop for $2.00. Looks amazing. Thanks for the great tutorial!

Your title is PERFECT! I've been looking for a cover for a couple of years and can't find anything I like. OK - so I took home ec in 7th grade which was more than 20+ years ago (maybe longer - wink, wink). I've been thinking about getting a sewing machine for other craft projects. What stitch would you use? Do you think this is easy enough for a very first sewing project? PS - what's "snap tape"?

I have a question about the ties please explain how those were done please.

Your drawings are awesome and so is your tutorial!!! I will pin this for future reference because it will be a summer project for me!! Thanks!

Use mitten clips. They work great

But ... you've made a duvet cover, no? You're putting it ON a duvet. Otherwise? Brilliant, and you're right - why ARE these covers so dang expensive?

I love your instructions and your art work. I am going to try this. Thank you so much for posting.

Nobody can reject
the info you have given in the blogs, this is actually a great work.
duvet and pillow
warehouse

Check out WalMart. Their sheets are not soft enough to sleep on, but would be perfect for a duvet cover. I used them to line my drapes.

You should think about doing a video also

The ties work great, my duvet did'nt have tabs on it so I pinched the corners together and tied around them and it stayed put until I had to take it off to wash it

It's great to the blog where low-tech tutorial I've found your great tutorial and I think your blog is really inspiring.your great in duvet , i also sugest you tu please one blog for Tea Towels
also. Thanks.

I love the concept and the catch line is funny, but show me a duvet that you finished, girl!

this is for a duvet COVER not a duvet....

Thanks for the tutorial!! I live in France. The word "duvet" means "down" (as in feathers). Here in France we use the duvet cover instead of a top sheet and blanket. The cover gets washed every week, as sheets do! The correct name for the cover in French is: "housse de couette" which means "comforter case" (the same as pillow case for pillows.) Voila! A little info to ponder!

Thanks for this! I used your tutorial to make a cover for my twin size duvet and it worked great! Used a full size sheet set, cut the elastic out of the fitted sheet. So now I have a cute duvet cover and two matching pillow cases for $16.00. I got the sheet set on sale at Anna's Linen. What a deal!

I so would do this if i knew how to sew or knew someone who could or would. Great idea!

What does RST stand for in the second picture?

This is honestly the first duvet tutorial I've completely understood, so I'll definitely be pinning for future use. Thanks so much for sharing this project, which I can't wait to use for my daughters' rooms.

Nice Hand Made Drawing Tutorial for Duvet!! You can keep drawing for future. I was looking for goose down duvet buying tips
and found your post. Obviously Great Post you have done so far.

I made a reversible duvet with light upholstery fabric from a going out of business sale ($6/yd for 54" wide) and a solid king size flat sheet from Walmart. Much cheaper that one from store and there'll never be another one like it. It's just a big pillowcase for your comforter. I made button holes on my sewing machine and put big buttons opposite, so it's easy to put on and off.

I am an avid garage sale and I recently found a brand-new in package, designer king size flat sheet . Price on the package was $50 for $1.(Kaufmann's store now Macy's) It is beautiful .
Now I have to find another to make the cover. Thank you so much for the tute.
And, the ties are a "must" I have had covers with no ties and the duvet shifts and looks lumpy.

Can you please post a picture of the actual duvet cover, I am a bit confused as to where the buttons are supposed to be placed after its all put together is this going to be kind of like a sheet fold it over?

Can you please post a picture of the actual duvet cover, I am a bit confused as to where the buttons are supposed to be placed after its all put together is this going to be kind of like a sheet fold it over?