So I’ve some time to play around with the two machines. I thought I would give you guys a little comparison between the two. Remember that the Pfaff is new to me and the Viking has been mine for several years. Is it sad I only use about 4 stitches on my serger? I have used the others, just not often. When I did this little experiment, I tried to make the stitches as close to each other as possible.

I should backup for a minute and tell you about these machines. These are both combo machines meaning they can do numerous serging stitches (3-thread overlock, 4-thread overlock, rolled hem, 3-thread flatlock, etc.) and also coverstitches. These both do narrow, wide, and triple coverstitches. The only downside of these machines, in my opinion, is switching them over between the the two different functions. It really doesn’t take that long and it’s not that hard.

Overall, the differences are minimal. Mostly, I forget to change the differential feed and stitch length because my Huskylock does it for me. I think I will set up the Huskylock for coverstitching right now, and set up the Pfaff for the other stuff. It’s going to so nice to have a full-time overlocker and coverstitcher! I’m all squeeeeeeeeeeeeee about it.

I love the look of flatlocking, but have always heard that the stitch isn’t that strong. I did a few little tests to see if that was all true. I’m a sucker for data collection. Turns out the flatlock did much better in tests than I had imagined. I used the same fabrics, the same thread, and I tried to keep everything controlled.

Test 1) Pull the two pieces apart widthwise as hard as you can (very scientific). Neither one of them popped seams, shredded seam allowances, or pulled apart. I was trying to see if the flatlock stitch would change inside the stitch itself, but no banana.

Test 2) Pull the pieces lengthwise. The 4-thread overlock stretched from 7” to 14” before the threads popped. The 3-thread flatlock never did break. It went from 7” to 17” and the fabric wouldn’t go any further.

I’m going to make a few garments with the flatlock stitch and we’ll see how it does in real life. It seems to be holding up fine so far. 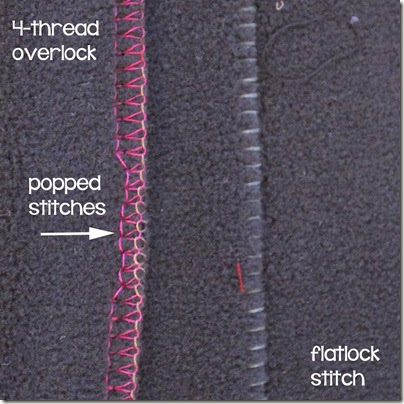 Both of the machines made nice looking flatlock stitches. The Pfaff was a little looser in the needle thread which makes the stitch a little flatter. I did this flatlock using the knife so the edges where even. My directions for my Huskylock say not to use the knife and to have the stitched go over the side of the fabric, which give it some extra wiggle room. My Pfaff book says you can do it either way. 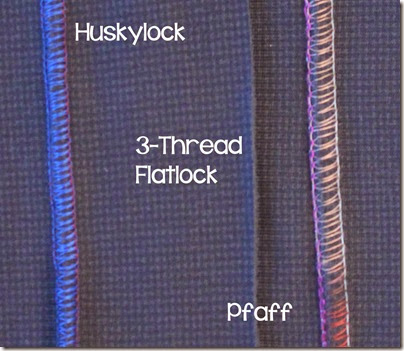