Here's a picture to prove that I have not given up. The flaps are on and the lining is in. I still have to hand stitch the sleeves and hem. I will slipstitch down the flaps because they keep flipping up. As you can see, I ditched the zipper idea a while ago and decided to go with hook and eyes. Hopefully tomorrow you'll see the whole thing presses, hemmed, and done. 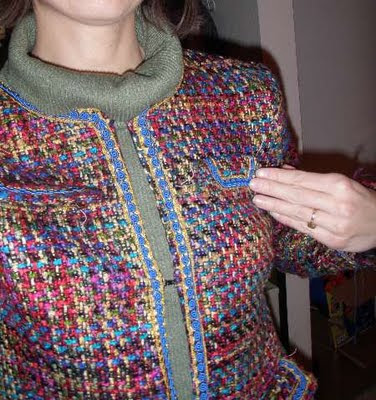 Looky, looky who just got eight yards of denim from the Fabric and Notions Coop. There's a beefy red, a shiny brown, and two blues. At first, I didn't think the brown and blues would work for jeans because they are a tad on the light side. But, after washing them, I think they might work. I think the brown would make a great faux-leather pair of pants. 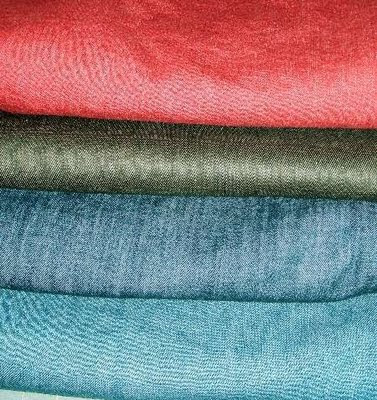 I've been feeling a bit stomach flu-ish so I'm not going to attempt anymore sewing tonight. When I get tired, I start to make stupid mistakes.
Posted by Dawn at 8:21 PM

Being tired always leads to very stupid stuff, sewing or not :-). But how about trying understitching the insertion of the pockets before you stitch down the flaps? That'd keep them in position better and look more natural.

Your jacket is looking fabulous!! Hope you are feeling better soon.

I love your jacket already - so pretty! I hope you feel better soon.

Can't wait to see the finished jacket, it looks amazing already! Great buys on the co-op, I put myself on a fabric diet, so I'll have to live vicariously through you! Feel better... I haven't felt that great either, but with the end of the marking period, I can't afford to be sick now, so I'm in denial!

Your jacket is looking awesome!!!

Great job!! I just love the colors and the trim!

Dawn-- looks wonderful. my second attempt of getting the article to you hasn't been successful! I apologize. I love the colors in the jacket.

Your hard work is paying off!!
Great denim!