PatternReview.com just introduced a new contest. It's like the British Sewing Bee. I copied the timelines from PatternReview's site: 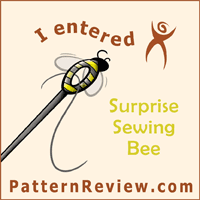 I'm IN! What about you? I'm a little nervous about random challenges (what if it's something I don't want to do???) and the elimination (ack!)
Posted by Dawn at 10:34 AM

I'm in for the fun of joining. I'm sure I'll be eliminated right away, but I am eagerly anticipating watching the progression of the finalists. If the first challenge doesn't appeal to me I may not do more than watch.

This sounds like crazy fun! I don't think I'll have the time to participate, but I surely will be watching.

I've joined, but have yet to find if I will be able to actually do it.

It looks like a lot of fun so I joined too!!

I will not join due to lack of time but I will enjoy watching!