I have a birthday party to go to on Saturday. It's for a little girl who is turning five. I wanted to make her something crafty and something inexpensive. She's five. I'm not into spending lots of money on toys that kids destroy. Instead I made her little monster stuffies. These were my practice monsters. Aren't they cute?!?!?!??! Once I made these I just couldn't stop. I made eight of these today. I have a sickness, stop me. I made two different types of monster. 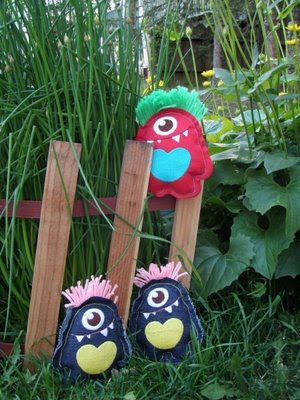 I would like to say that it was my kids who made me pose them in the garden. But no, that was all me. 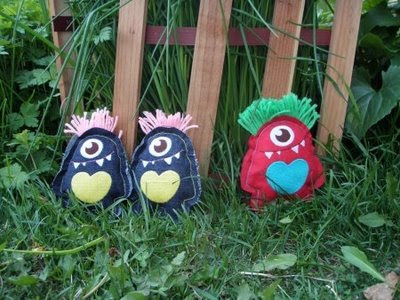 This is the real set for the birthday girl. She's really into pink. I decided that I would add snaps to the "mom" and "baby" monsters so they would be a set and stick together. The back of the "mom" has the male end of the snaps and the back of the "babies" had the female end. It amuses me to no end that the ones on the "mom" look like nipples. Trust me, it's funny. I'll take a picture tomorrow. 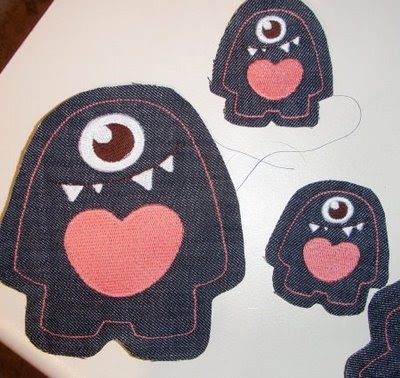 What I love about these is that my kids love them so I know she will love them too. I like toys that promote that imagination side of play. Also, it used up a bunch of denim scraps. I think once they get washed the edges will fray and they will look even cuter.

So, what am I going to do with the other ones I made today? I was tossing around the idea of throwing them on Etsy. I really like making them. They make me chuckle. The embroidery machine does all the work. I just stuff them and stitch the side seams when they are finished. I may see if there are any takers . . .
Posted by Dawn at 9:09 PM

These are SO CUTE!

You could put them around the outside of your house to ward off those pesy neighbors!

Super cute! Great idea of having them snap together. I always buy books for kid's birthdays because I know they won't need one more toy. Plus I love childrens' literature. But stuffed monsters is a great idea as well.

These are the cuitest ever. They look like they could be a character in a book themselves. Ever though about writing a book about them.

I'm so amused that I share a love of pink with a five year old. am in fact wearing a black and pink suit today. And pink glasses. Cute monsters!

These are adorable enough to tempt me into buying an embroidery machine! If you Scotch-guarded the heck out of them, or made them out of more weather resistant materials, they could LIVE in the garden! That's way better than some lousy old gnome that anybody could have

Oh, My! Those are ADORABLE!!

Those are really adorable. If I had a 5 yr old, I would love for her to get a gift like Stuffie - for just the reason you gave. Kids need to use their imaginations more.

These are cute. I a perfect gift for a five year old.

Where did you find that embroidery design? It is absolutely adorable! Eight of 'em, huh? I agree with gwensews, voo-doo to keep the crazies away!

Surprise, surprise...I awarded you the Attitude of Gratitude on my blog!

So cute! Someone made me a little pink monster (similar to yours but rounder body) when I was a kid and I loved it --- I'm sure she'll love yours!

Love em!!! I thought about buying some when Urban Threads had their birthday sale, but I had enough good stuff in my shopping cart already!

Too cute! I think you are on to the next pet rock!

They are so adorable - I can see how making them would be addictive. Yes, I want one, too!!! You have another award (from me) in this blog post: "One Lovely Bog" Award. I discovered your blog when I was trying to make sense of BWOF 02/09 #118. I made mine a little differently from yours but don't think it turned out great. I never would have gotten it finished without your tutorial! I finally have pictures that aren't that great (maybe I should have held a dog in the picture like Burda did). Anyway, I'll post about my experience in the next few days. Meanwhile, you can pick up your award at http://rosessewingroom.blogspot.com

These are SO CUTE! Are they UT?? I'm scanning comments now. (And speed reading your blog, I haven't had time to read anybody's blog in 2 weeks!!!)