That fantastic man I'm married to is taking me to Hawaii again! We are going Outside* in January. But, this time we are going with another couple and bringing the kids. I wasn't so keen on the idea until he told me that the nanny is going too. We are splitting her costs with the other couple that is going. It sounds extravagant but the tickets were only $300 and we were renting a house anyway.
To prepare for this trip, I've decided to make the girls swimsuits for Christmas. They will each get two. I went to my local fabric boutique, Seams Like Home, and found this pattern and bought my elastic. Swimsuits are really fast to whip up so I should hopefully have these four done by the weekend. I'm planning on two full suits and two, two-piece suits. I still have a bunch of swimwear fabric from last year. Blogger is not letting me link right now to that post but I will later.

While I was there I also snagged two yards of this fantastic ITY jersey knit. It's it fab? It's a rather big print. Did you notice that it's not purple? Maybe I'm coming out of the purple phase? 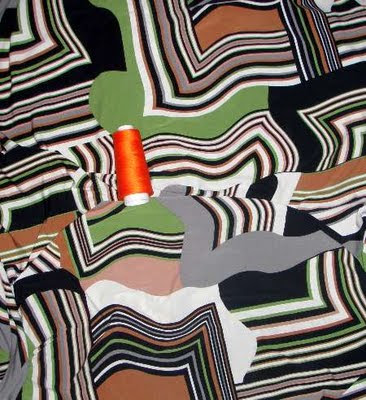 *Outside is the term that Alaskan use for the rest of the United States. We also call it the Lower 48 but that doesn't include Hawaii. You often hear Alaskans telling other Alaskan, "Oh yea, we're going Outside for the holidays." Then they say You Betcha and wink. No wait, that's just Sarah Palin.
Posted by Dawn at 5:06 PM

Sounds like a fabulous vacation. If we go anywhere we call it "down there." A trip to Maine from here is "down there". Have a fabulous time and love your knit.

A trip nanny is worth their weight in gold! We took our babysitter to nanny for us in Mexico for spring break this year and it was WONDERFUL. We will definitely do it again.

Ugh! I'm so jealous!!! 4 suits in a weekend, huh? Man, I don't know how you do it! Oh, and thanks for making me laugh at loud with the "you betcha and wink" comment! Bwaaahaaahaaha!

That's great - I travel to teach to Hawaii frequently in the Winter (January and February) - and I notice the largest amount of visitors are from Japan and Alaska!

I also notice all my Hawaiian friends planning Alaskan summer vacations. It must be something between the residents of the 49th and 50th states that draws them together.

As kids we got new bathers (swimsuits) for Christmas every year. It has only just occurred to me now that Santa probably doesn't usually bring beach gear to kids in the Northern Hemisphere!

Oh, have a great time! I'm so jealous... Your DH is definitely a keeper!

Ah, I shouldn't be jealous, since I just came back from vacation, but I am. Enjoy!

I guess they also don't say "Maverick" while they wink. ;)

We LOVE Hawaii! So jealous that you're getting to go so soon!

"Outside" sounds so science fictiony :-) Trip sounds fabulous, and the kids will love it too. Take sunscreen!

I snorted my Red Stripe out my nose over the Sarah Palin comment. Hilarious.

I'd say lucky you about Hawaii, but in Sydney Australia, it is not quite summer yet, and we have had at least two days now with temps of 41degrees celsius (105.8F), so I would LOVE to be somewhere COLD :-) that said, the idea of taking your nanny to mind the kids is the best of both worlds...will they stay with her?

Have fun! Envious of the holiday!

I have this pattern too! can't wait to see wat you make of it.
Enjoy your vacation...