So I've been wondering what the difference was between the "old" Jalie 2005 and the new Jalie 2508. The 2508 is supposed to be the replacement for the 2005 pattern. The 2005 is a favorite at PatternReview.com with over 80 reviews. I was hoping that Jalie was not just repackaging the same t-shirt pattern so they could generate more sales. I have made the Jalie 2005 several times (maybe 7 times!) and was satisfied with the fit. It did wrinkle above the bust a bit but it was exactly like RTW and it wasn't that bad. I received Jalie 2804, the empire cross top, and decided that I should compare the two. I really, really love boatneck tops. Jalie 2005 has a boatneck version but the new version has a polo-type version instead. I decided to trace off the 2804 pattern using the boatneck pieces from the 2005 pattern.


Turns out, there are some substantial differences between the armscye of the two patterns. The new Jalie has a very scooped front armhole. It is much shorter than the original t-shirt. These pictures are comparing front and back. 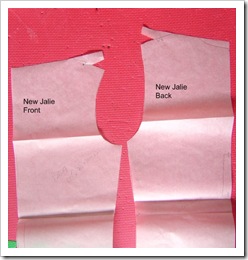 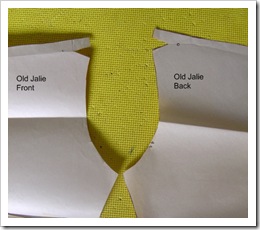 These pictures are comparing the old and new in one picture. You can see that the front is scooped a lot more in the new pattern. The back is straighter in the new version. 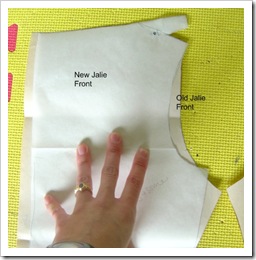 Here are the sleeves. The new Jalie is a bit wider and quite a bit more flat. And just FYI, that notch does not line up with the shoulder seam. It matches up to a notch on the upper back. 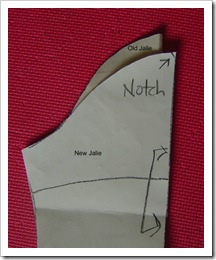 Here is the resultant top. There are no above-bust wrinkles and it fits great. The new Jalies are also quite a bit longer than the old Jalies. 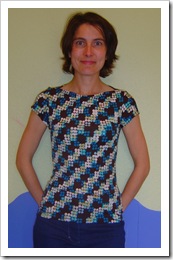 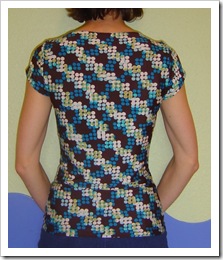 Great T-shirt. Thanks for the comparative analysis.

Very cute top - I love the boatneck style. Thanks for the compare too, tho I don't own either pattern I'm sure others will find the comparison very helpful.

The "new" top looks just like the changes I used to make to the armhole of the "old" top to eliminate the wrinkles.

It's interesting how tops have gotten longer in recent years. I remember when I used to shorten my tops! But now I welcome the longer lengths.

Cute top Dawn! I wish I had the old Jalie. I may have to look for it!

Great top! Looks like the fit is dead on. I bet it's super comfortable.

Where is the fabric from?

Excellent result. I too like boatneck shirts and bought this pattern some months ago. I noticed on the pattern it is fold-over and topstitch. Do you own a coverstitch machine for the topstitching or did you use your regular machine? Thanks-myrcrew

That is interesting. My saran wrap /sloper has a much shorter (and scooped) front armhole and longer back armhole. So perhaps it is time I tried some Jalies!

Your new top looks great and fits you perfectly.

That was most helpful comparison. I just starting making some Jalie tops. I am glad you know from sewing older versions that the newer tops are longer. I have had to shorten all the tops I have made recently and all are the newer patterns. Since I had nothing to compare to older version I was wondering if they were always so long.

I like your top and it fits you so nicely.

Thanks so much for the comparison of the old and new jalie patterns!

having some troubles finding ANY boatneck patterns. ideas/references would be most welcom

Wow! I have wondered what the differences are between the two JAlie tops and now I know... Thank you!!